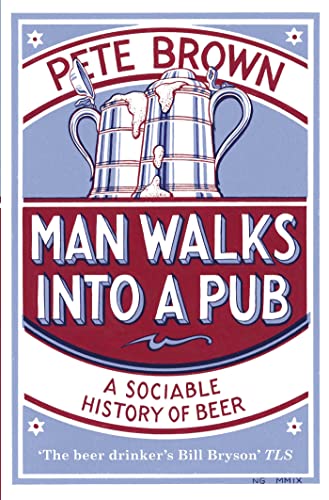 Man Walks Into A Pub
by Pete Brown

In Stock
$10.99
In MAN WALKS INTO A PUB, Pete Brown takes us on a well-lubricated pub-crawl through the amazing story of beer, from the first sacred sip of ancient Egyptian bouza to the last pint of lager on a Friday night.
Like New Very Good Good
Only 2 left

Man Walks Into A Pub Summary

It's an extraordinary tale of yeast-obsessed monks and teetotal prime ministers; of how pale ale fuelled an Empire and weak bitter won a world war; of exploding breweries, a bear in a yellow nylon jacket and a Canadian bloke who changed the dringking habits of a nation. It's also the story of the rise of the pub from humble origins through an epic, thousand-year struggle to survive misunderstanding, bad government and misguided commerce. The history of beer in Britain is a social history of the nation itself, full of catastrophe, heroism and an awful lot of hangovers.

'a pleasant antidote to more po-faced histories of beer' Guardian

'Packed with bar-room bet-winning facts and entertaining digressions, this is a book into which every pub-goer will want to dip.' Express

Man Walks Into A Pub Reviews

SECOND EDITION: Matured longer for a slightly thicker body and a hint of extra bitterness 'A pleasant antidote to more po-faced histories of beer' - Guardian 'Like a good drinking companion, Brown tells a remarkable story: a stream of fascinating facts, etymologies and pub-related urban phenomena' - TLS 'Packed with bar-room bet-winning facts and entertaining digressions, this is a book into which every pub-goer will want to dip.' - Express

Pete Brown was born in 1968 in Barnsley, South Yorkshire. Since 1991 he has worked in advertising, specializing in 'beer' accounts such as Heineken and Stella Artois. He has appeared regularly on television as a beer expert and writes for the beer industry press.

GOR008935183
Man Walks Into A Pub: A Sociable History of Beer (Fully Updated Second Edition) by Pete Brown
Pete Brown
Used - Like New
Paperback
Pan Macmillan
2004-07-01
432
0330412205
9780330412209
N/A
Book picture is for illustrative purposes only, actual binding, cover or edition may vary.
This is a used book - there is no escaping the fact it has been read by someone else and it will show signs of wear and previous use. Overall we expect it to be in very good condition, but if you are not entirely satisfied please get in touch with us.