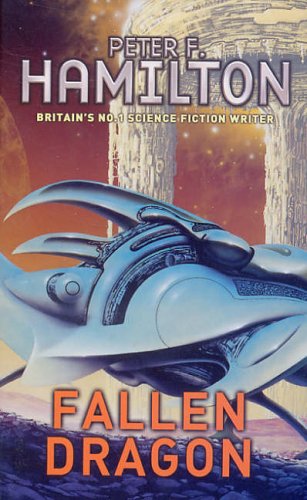 In Stock
$10,69
A space adventure on galactic scale from one of the world's bestselling Science Fiction writers.
Very Good Good
7 in stock

Born in a colony world in 2310, Lawrence Newton hankered after the golden era of starships exploring the galaxy. But the age of human starflight was drawing to a close, so this hot-headed teenager ran away from home in search of adventure. Twenty years later, he's the sergeant of a washed-out platoon taking part in the bungled invasion of another world. The giant corporations call such campaigns 'asset realization', but in practice it's simple piracy.

While he's on the ground, being shot at and firebombed by local resistance forces, Lawrence hears stories about the Temple of the Fallen Dragon - and a sect devoted to the worship of a mythical creature that fell to the ground millennia ago. More importantly, its priests are said to guard a hoard of treasure large enough to buy lifelong happiness - which information prompts him to mount a private-enterprise operation of his own.

Peter F. Hamilton was born in Rutland in 1960, and still lives near Rutland Water. His previous novels are the Greg Mandel series and the bestselling 'Night's Dawn' trilogy: The Reality Dysfunction , The Neutronium Alchemist and The Naked God. Also published by Macmillan (and Pan) is A Second Chance at Eden, a novella and six short stories, and The Confederation Handbook, a vital guide to the 'Night's Dawn' trilogy. His most recent novels were Misspent Youth and the Commonwealth Saga novels, Pandora's Star and Judas Unchained, the latter to be published in hardcover in October 2005.

GOR001249555
Fallen Dragon by Peter F. Hamilton
Peter F. Hamilton
Used - Very Good
Paperback
Pan Macmillan
2002-07-05
816
0330480065
9780330480062
Short-listed for The Arthur C. Clarke Award 2002 (UK)
Book picture is for illustrative purposes only, actual binding, cover or edition may vary.
This is a used book - there is no escaping the fact it has been read by someone else and it will show signs of wear and previous use. Overall we expect it to be in very good condition, but if you are not entirely satisfied please get in touch with us.