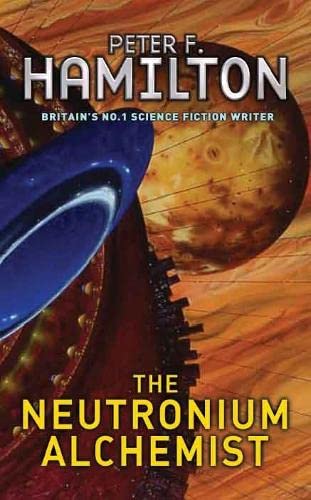 Not every fallen angel comes from heaven...

The ancient menace has finally escaped from Lalonde, shattering the Confederation's peaceful existence. Those who succumbed to it have acquired godlike powers, but now follow a far from divine gospel as they advance inexorably from world to world.

On planets and asteroids individuals battle for survival against the strange and brutal forces unleashed upon the universe. Governments teeter on the brink of anarchy, the Confederation Navy is dangerously overstretched, and a dark messiah prepares to invoke his own version of the final Night.

In such desperate times the last thing the galaxy needs is a new and terrifyingly powerful weapon. Yet Dr Alkad Mzu is determined to retrieve the Alchemist - so she can complete her thirty-year-old vendetta to slay a star. Which means Joshua Calvert has to find Dr Mzu and bring her back before the Alchemist can be reactivated.

But he's not alone in the chase, and there are people on both sides who have their own ideas about how to sue the ultimate doomsday device.

`Hamilton puts Britain sci-fi back into interstellar overdrive.' The Times

`Space opera has rarely been dealt with in such majesty... inventive, ambitious, and, like the greatest of tumbling acts, leaves you giddy for more.' Daily Express

Peter F. Hamilton was born in Rutland in 1960, and still lives near Rutland Water. His previous novels are the Greg Mandel series and the bestselling 'Night's Dawn' trilogy: The Reality Dysfunction, The Neutronium Alchemist and The Naked God. Also published by Macmillan (and Pan) is A Second Chance at Eden, a novella and six short stories, and The Confederation Handbook, a vital guide to the `Night's Dawn' trilogy. His most recent novels were Fallen Dragon, Misspent Youth and Pandora's Star.

GOR001237889
The Neutronium Alchemist by Peter F. Hamilton
Peter F. Hamilton
Used - Very Good
Paperback
Pan Macmillan
1998-10-09
1280
0330351435
9780330351430
N/A
Book picture is for illustrative purposes only, actual binding, cover or edition may vary.
This is a used book - there is no escaping the fact it has been read by someone else and it will show signs of wear and previous use. Overall we expect it to be in very good condition, but if you are not entirely satisfied please get in touch with us.