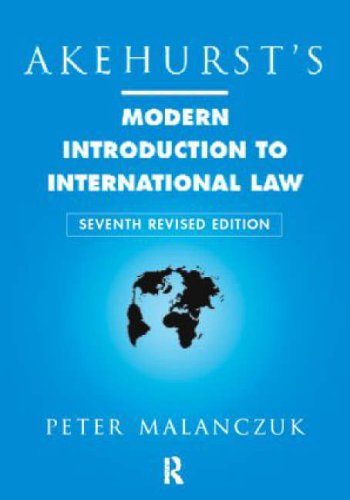 In Stock
$11.69
The most widely-used textbook in the field; ideal for students of international politics, for whom the topics covered on a legal syllabus have been carefully adapted.
Like New Very Good
Only 1 left

First published in 1970, A Modern Introduction to International Law rapidly established itself as the most widely used and successful textbook in its field. It covers a variety of topics from diplomatic immunity to the UN and from recognition of government to war crimes. This new edition has been completely revised and updated by Peter Malanczuk to take account of many recent developments and includes new chapters on human rights, the environment and the economy.

"Professor Malanczuk has written a new edition of Michael Akehurst's textbook which maintains its high traditions of clarity, precision and coherence. The new edition, more widely-detailed and widely-referenced, will appeal to a wider audience than its predecessor, whilst still satisfying the needs of those seeking an accessible introduction to international law, whether lawyers or not."
-Colin Warbrick, University of Durham

1 Introduction 2 History and Theory 3 Sources of international law 4 International law and municipal law 5 States and governments 6 International organisations, companies, individuals and groups 7 Jurisdiction 8 Immunity from jurisdiction 9 Treaties 10 Acquisition of territory 11 Legal consequences of changes of sovereignty over territory (state succession) 12 The law of the sea 13 Air space and outer space 14 Human rights 15 Economy 16 Environment 17 State responsibility 18 Peaceful settlement of disputes between states 19 International wars, civil wars and the right to self-determination: ius ad bellum 20 Means of waging war and criminal responsibility: ius in bello 21 The charter and the organs of the United nations 22 The United Nations and peace and security Conclusion; Table of Cases; Table of treaties, resolutions and other documents; Index

GOR010554799
Akehurst's Modern Introduction to International Law by Peter Malanczuk
Peter Malanczuk
Used - Like New
Paperback
Taylor & Francis Ltd
1997-06-26
472
041511120X
9780415111201
N/A
Book picture is for illustrative purposes only, actual binding, cover or edition may vary.
This is a used book - there is no escaping the fact it has been read by someone else and it will show signs of wear and previous use. Overall we expect it to be in very good condition, but if you are not entirely satisfied please get in touch with us.