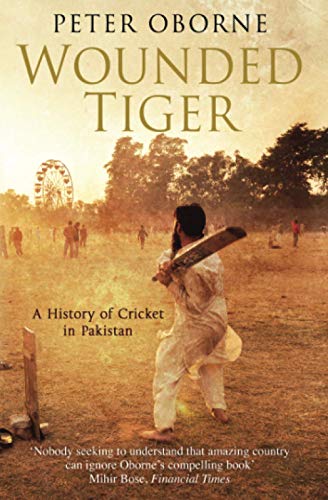 Used Price
$16.49
Free Shipping in the US
Adefinitive and compelling account of the controversial history of cricket in Pakistan
Reviews:
Trustpilot
Like New Very Good

Wounded Tiger: A History of Cricket in Pakistan by Peter Oborne

The nation of Pakistan was born out of the trauma of Partition from India in 1947. Its cricket team evolved in the chaotic aftermath. Initially unrecognised, underfunded and weak, Pakistan's team grew to become a major force in world cricket. Since the early days of the Raj, cricket has been entwined with national identity and Pakistan's successes helped to define its status in the world. Defiant in defence, irresistible in attack, players such as A.H.Kardar, Fazal Mahmood, Wasim Akram and Imran Khan awed their contemporaries and inspired their successors.
The story of Pakistan cricket is filled with triumph and tragedy. In recent years, it has been threatened by the same problems affecting Pakistan itself: fallout from the 'war on terror', sectarian violence, corruption, crises in health and education, and a shortage of effective leaders. For twenty years, Pakistan cricket has been stained by the scandalous behaviour of the players involved in match-fixing. Since 2009, the fear of violence has driven Pakistan's international cricket into exile. No one knows when it will return home.
But Peter Oborne's narrative is also full of hope. For all its troubles, cricket gives all Pakistanis a chance to excel and express themselves, a sense of identity and a cause for pride in their country. Packed with first-hand recollections, and digging deep into political, social and cultural history, Wounded Tiger is a major study of sport and nationhood.

Peter Oborne is a regular commentator on politics for television, and chief political commentator of the Daily Telegraph. He is the author of several previous books including the acclaimed Alastair Campbell: New labour and the Rise of the Media Class, The Rise of Political Lying, The Triumph of the Political Class, and Basil D'Oliveira, Cricket and Conspiracy: The Untold Story which won the William Hill Sports Book of the Year Award in 2004.

GOR008133845
Wounded Tiger: A History of Cricket in Pakistan by Peter Oborne
Peter Oborne
Used - Like New
Paperback
Simon & Schuster Ltd
2015-04-01
624
184983248X
9781849832489
Winner of British Sports Book Awards: Cricket Book of the Year 2015
Book picture is for illustrative purposes only, actual binding, cover or edition may vary.
The book has been read, but looks new. The book cover has no visible wear, and the dust jacket is included if applicable. No missing or damaged pages, no tears, possible very minimal creasing, no underlining or highlighting of text, and no writing in the margins.