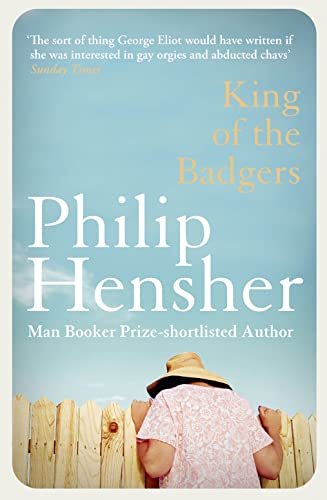 King of the Badgers
by Philip Hensher

The new novel from the Booker Prize-shortlisted author of `The Northern Clemency'.

King of the Badgers Summary

King of the Badgers by Philip Hensher

The new novel from the Booker Prize-shortlisted author of `The Northern Clemency'.

Hanmouth: a quiet, picturesque English seaside town. But behind closed, Georgian front doors and the within the artisan cheese shop, its residents live lives that are anything but.

When an 8-year-old girl goes missing from the estate on the fringes of the town, Hanmouth becomes the centre of national attention. Under the scrutiny of the investigation the extraordinary individual lives of the community are laid bare: the passions of a quiet international aid worker; a recently widowed old woman's late discovery of sexual gratification; and a memorable party, held by the Bears.

Through the apparent civility and spiralling paranoia a small town, Philip Hensher brings us another brilliantly funny and perfectly observed slice of contemporary English life.

Customer Reviews - King of the Badgers

King of the Badgers Reviews

`An extraordinary, great pudding of a novel which confirms Philip Hensher as one of the most entertaining writers of Britain today.' Ross Gilfillan, Daily Mail

`Each character in this astute, complex and enjoyable novel imposes him or herself with some sort of reality, even those we only glimpse through their kitchen windows.' Lucy Daniel, Daily Telegraph

`Often novelists write worst when they seem to be enjoying themselves most. With Hensher it is the opposite. His enjoyment in his own cleverness and fluency is infectious.' Sunday Telegraph

`As ever, one is struck, and seduced, by a coruscating intelligence, that manifests itself in dozens of literary allusions waiting to be uncombed ...and hundreds of individual sentences burnished up to the max.' Independent on Sunday

`Hensher has established himself with "The Mulberry Empire" and "The Northern Clemency" as one of our most ambitious novelists. His ear for dialogue, sharp sense of the absurd and appreciation of human self-delusion recall Kingsley Amis.' Guardian

`Page by page, it is a powerfully delightful book, rich in pathos and drama, rowdy with life' Edmund Gordon, TLS

`Philip Hensher's talent was evident on every page of `King of the Badgers'' Leo Robson, NS, Books of the Year

Philip Hensher is a columnist for the Independent, arts critic for the Spectator and a Granta Best of Young British novelist. He has written six novels, including The Mulberry Empire and the Booker-shortlisted The Northern Clemency, and one collection of short stories. He lives in South London and Geneva.

GOR003774979
King of the Badgers by Philip Hensher
Philip Hensher
Used - Very Good
Paperback
HarperCollins Publishers
2012-03-29
448
0007301340
9780007301348
N/A
Book picture is for illustrative purposes only, actual binding, cover or edition may vary.
This is a used book - there is no escaping the fact it has been read by someone else and it will show signs of wear and previous use. Overall we expect it to be in very good condition, but if you are not entirely satisfied please get in touch with us.