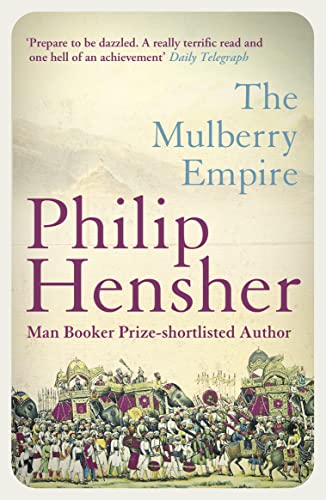 The Mulberry Empire
by Philip Hensher

The bestselling novel from the Man Booker Prize shortlisted author of The Northern Clemency and King of the Badgers.

The Mulberry Empire by Philip Hensher

The bestselling novel from the Man Booker Prize shortlisted author of The Northern Clemency and King of the Badgers.

`The Mulberry Empire' recounts an episode in the Great Game in central Asia - the courtship, betrayal and invasion of Afghanistan in the 1830s by the emissaries of Her Majesty's Empire, which is followed by the bloody and summary expulsion of the British from Kabul following an Afghani insurrection.

At its heart the encounter between West and East, as embodied in the likeable, complex relationship between Alexander Burnes, leader of the initial British expeditionary party, and the wily, cultured Afghani ruler, the Amir Dost Mohammed Khan.

For those who enjoyed William Dalrymple's `Return of a King', `The Mulberry Empire' is a must-read.

`Prepare to be dazzled ... A really terrific read' Daily Telegraph

`There is pleasure here, in passion and in absurdity, in landscape and in conversation, in costume and in food. There is pleasure, above all, in writing. A delightful entertainment, a timely social and political commentary, and a highly literary and ambitious novel.' Ahdaf Soueif, Guardian

`Outstanding...Hensher reveals the significance of the small moment, of great figures seen in close-up, and of a subtle, sensuous intimacy with the fabric of these long-gone lives. The effect is exhilarating.' Helen Dunmore, The Times

`Exuberant, overflowing with life, highly-coloured, entrancing: a novel to lose yourself in...Nabokov said that the novelist must be storyteller, teacher, and enchanter. In this novel Hensher is triumphantly all three.' Allan Massie, Scotsman

Philip Hensher is a columnist for the Independent, arts critic for the Spectator and a Granta Best of Young British novelist. He has written six novels, including The Mulberry Empire and the Booker-shortlisted The Northern Clemency, and one collection of short stories. He lives in South London.

GOR001906747
The Mulberry Empire by Philip Hensher
Philip Hensher
Used - Very Good
Paperback
HarperCollins Publishers
2003-02-03
544
0007112270
9780007112272
N/A
Book picture is for illustrative purposes only, actual binding, cover or edition may vary.
This is a used book - there is no escaping the fact it has been read by someone else and it will show signs of wear and previous use. Overall we expect it to be in very good condition, but if you are not entirely satisfied please get in touch with us.