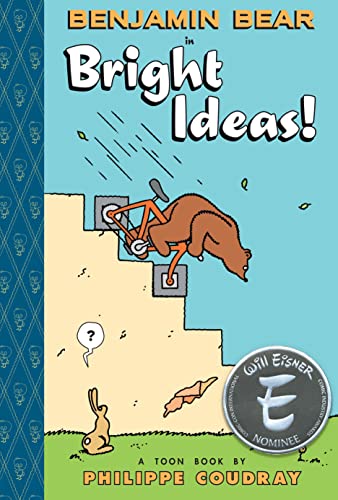 Benjamin Bear does everything in his own funny way, whether it's trying to walk on water, ride a square bicycle or go on an undersea adventure with only a fishbowl for a helmet. In this series of one page, gag filled comic strips, starring a very loopy bear, Philippe Coudray creates a zany world that makes kids think and solve puzzles, drawing all readers into the game.

The clever bear and his assorted crew of animal pals from Benjamin Bear in Fuzzy Thinking (2011) return for another collection of single-page strips, each one a marvel of economy in setup, delivery, and payoff...Honing a well-rounded sense of humor may be just as important as any other aspect of childhood learning, and you ll find no finer choice for that than the ingenious exploits of this very clever bear.
Booklist (starred review)
This book rewards what six-year-olds are already good at (scrutiny), encourages a new skill (reading), and enlarges the imagination (heaven).
The Horn Book (starred review)
Kids will laugh out loud at Benjamin as he solves problems in zany, often misguided, ways. ... A funny, smart little book that is definitely interesting enough to hold the attention of reluctant readers.
School Library Journal (Starred review)"

Phillipe Coudray loves drawing comics and working with his twin brother Jean-Luc, who is also a humorist. Philippe's books are often used in the schools of France, his home country, where Benjamin Bear's French cousin, Barnabe, has won many prizes. In the U.S., Benjamin Bear in Fuzzy Thinking was nominated for an Eisner Award.

GOR007082076
Benjamin Bear In Bright Ideas by Philippe Coudray
Philippe Coudray
Used - Very Good
Hardback
Raw Junior LLC
2013-03-14
32
1935179225
9781935179221
N/A
Book picture is for illustrative purposes only, actual binding, cover or edition may vary.
This is a used book - there is no escaping the fact it has been read by someone else and it will show signs of wear and previous use. Overall we expect it to be in very good condition, but if you are not entirely satisfied please get in touch with us.