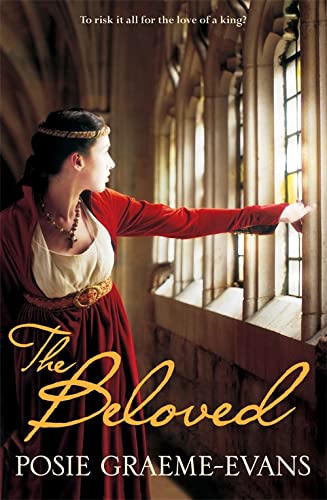 The Beloved
by Posie Graeme-Evans

Used Price
$7.69
Free Shipping in the US

The thrilling climax to the Anne trilogy that began with THE INNOCENT and THE EXILED. The world of Philippa Gregory's White Queen during the Wars of the Roses comes vividly to life.

The Beloved by Posie Graeme-Evans

The thrilling climax to the Anne trilogy: the world of Philippa Gregory's White Queen is seen from the point of view of her greatest rival.
As England tears itself apart in the War of the Roses, Anne de Bohun lives far from the intrigues of cities and courts.
Once King Edward IV's mistress, Anne has found safety with their son in far-away Flanders. But now Edward himself is a hunted fugitive, and Anne's real father, King Henry VI rules again from Westminster.
Summoned by an enigmatic message from her lover, Anne is drawn once more to the passion, the excitement and the deadly danger that Edward brings into her life. But now, the girl who was once a penniless servant has a child to protect and an inheritance to defend.
Can she let her love for Edward threaten everything she has? Or will she need his help to protect her from the powerful enemy who means to destroy her?

Historical fiction gallops to new heights in this debut tale of intrigue, lust and betrayal. * Woman's Own on THE INNOCENT *
The reader is taken on a galloping ride through the Middle Ages and the shaky reign of Edward IV, the love of Anne's life. There's lust, conspiracy and impressive historical detail to set the scene. * Daily Telegraph, Sydney on THE INNOCENT *
Posie Graeme-Evans' masterful prose brings vividly to life the colours, sounds, smells and sights of a romantic and thrilling period in history. * Sydney Weekly Courier on THE EXILED *
The sequel to THE INNOCENT and every bit as good, with its richly detailed settings, intrigue, adventure and sizzling love affair between King Edward and Lady Anne. * Australian Women's Weekly on THE EXILED *

Posie Graeme-Evans was born in England but travelled all over the world with her parents, a novelist and an Australian spitfire fighter pilot. Posie has worked in the Australian film and television industry for the last 25 years as an editor, director and producer on hundreds of prime time television programmes including the number one drama series McLeod's Daughters and the worldwide pre-school phenomenon Hi-5.

Posie and Andrew Blaxland, her husband and creative partner, live in Tasmania.

GOR001278297
The Beloved by Posie Graeme-Evans
Posie Graeme-Evans
Used - Very Good
Paperback
Hodder & Stoughton General Division
2006-09-07
464
0340836520
9780340836521
N/A
Book picture is for illustrative purposes only, actual binding, cover or edition may vary.
This is a used book - there is no escaping the fact it has been read by someone else and it will show signs of wear and previous use. Overall we expect it to be in very good condition, but if you are not entirely satisfied please get in touch with us.