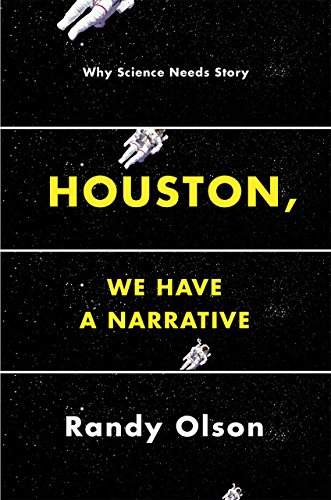 Houston, We Have a Narrative
by Randy Olson

Houston, We Have a Narrative Summary

Houston, We Have a Narrative: Why Science Needs Story by Randy Olson

Ask a scientist about Hollywood, and you'll probably get eye rolls. But ask someone in Hollywood about science, and they'll see dollar signs: moviemakers know that science can be the source of great stories, with all the drama and action that blockbusters require. That's a huge mistake, says Randy Olson: Hollywood has a lot to teach scientists about how to tell a story-and, ultimately, how to do science better. With Houston, We Have a Narrative, he lays out a stunningly simple method for turning the dull into the dramatic. Drawing on his unique background, which saw him leave his job as a working scientist to launch a career as a filmmaker, Olson first diagnoses the problem: When scientists tell us about their work, they pile one moment and one detail atop another moment and another detail-a stultifying procession of "and, and, and." What we need instead is an understanding of the basic elements of story, the narrative structures that our brains are all but hardwired to look for-which Olson boils down, brilliantly, to "And, But, Therefore," or ABT. At a stroke, the ABT approach introduces momentum ("And"), conflict ("But"), and resolution ("Therefore")-the fundamental building blocks of story. As Olson has shown by leading countless workshops worldwide, when scientists' eyes are opened to ABT, the effect is staggering: suddenly, they're not just talking about their work-they're telling stories about it. And audiences are captivated. Written with an uncommon verve and enthusiasm, and built on principles that are applicable to fields far beyond science, Houston, We Have a Narrative has the power to transform the way science is understood and appreciated, and ultimately how it's done.

Customer Reviews - Houston, We Have a Narrative

Houston, We Have a Narrative Reviews

"If you've read the Dot Earth blog a lot, you know I'm a fan of the ultimate science-as-story coach, Randy Olson, who left a tenured job teaching marine biology to make provocative films on science controversies and then write, and write, and write about connecting science to society through storytelling. His new book, Houston, We Have a Narrative, is the ultimate distillation of his communication philosophy, which is to be relentlessly, even recklessly, creative (avoiding 'the nerd loop' at all costs) while hewing rigorously to a template that has roots in Aristotle and Hegel and runs through every South Park episode."--Andy Revkin "New York Times"
"Scientist-turned-filmmaker Randy Olson makes a bold claim: scientists cannot adequately explain their own work. He attributes all of the issues facing science communication today--false positives, an uninterested public, and unapproved grant proposals--to scientists' lack of narrative intuition. Rather than turn to the humanities for help, Olson suggests scientists learn from the true masters of storytelling--Hollywood filmmakers. His latest book examines the age-old divide between sciences and the humanities, as well as the new adversarial relationship between science and film, which he says can save science."
--Nancy Duarte, CEO, Duarte, Inc., and best-selling author "Journal of Science Communication"
"From Aristotle to South Park, Randy Olson has mined story-telling wisdom through the ages to develop this funny, helpful guide for scientists who want to meld minds with the rest of the human race. He shows why scientists need to tell stories, and then he shows them how to do it."--Carl Zimmer, author of Parasite Rex

Randy Olson was a tenured professor of marine biology at the University of New Hampshire before moving to Hollywood and entering film school at the University of Southern California. He has written and directed a number of films, including the acclaimed Flock of Dodos and he is the author of numerous successful books, including Don't Be Such A Scientist.

CIN000304099
Houston, We Have a Narrative: Why Science Needs Story by Randy Olson
Randy Olson
Used - Very Good
Paperback
The University of Chicago Press
2015-09-29
256
022627084X
9780226270845
N/A
Book picture is for illustrative purposes only, actual binding, cover or edition may vary.
This is a used book - there is no escaping the fact it has been read by someone else and it will show signs of wear and previous use. Overall we expect it to be in very good condition, but if you are not entirely satisfied please get in touch with us.