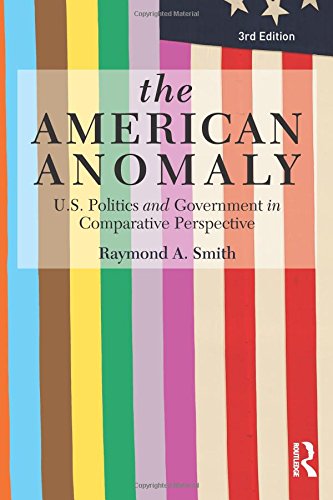 Seymour Martin Lipset pronounced over a decade ago, "Someone who knows only one country knows no country." It is well established that students learn the intricacies of American politics better when they are presented in a comparative context. In today's globalized society and workforce, it is all the more important for students to understand that the American political system is in many ways the exception and not the rule. Introductory textbooks on American government, however, rarely emphasize in sufficient depth how the United States compares to other political systems. And introductions to comparative politics infrequently situate the United States in their analysis.

The American Anomaly systematically analyzes the U.S. political system by way of comparison with other countries, especially other industrialized democracies. It is organized into four sections, respectively covering the constitutional order, governmental institutions, political participation, and public policy. Extended case studies in each chapter draw on all the major regions of the world.

"Comparison generates knowledge, and the comparative approach used in this textbook offers a superb way to stimulate student interest not only in American politics, but also in the politics of other nations. I wish I'd read this book when I was in college."

"With today's globalization, revolutions seeking democracy, and new technology that has more closely connected the world, the new edition of The American Anomaly is a particularly timely book. It provides an engaging introduction to how American government and politics still stands out as an important democratic model, as it is in fact so different in many ways from other democracies that have followed in its general path."

Raymond A. Smith, Ph.D. is an adjunct assistant professor of political science at Columbia University and New York University and a Senior Fellow with the Progressive Policy Institute. He is author of Importing Democracy: Ideas from around the World to Reform and Revitalize U.S. Politics and Government.