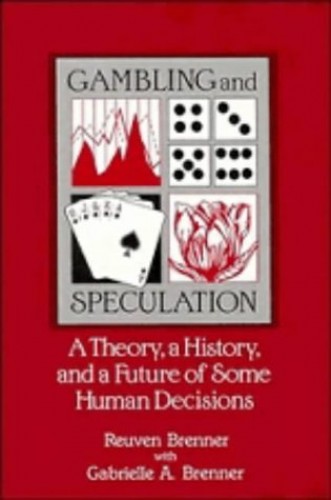 Used Price
$92.99
Free Shipping in the US
Gambling and Speculation takes the long, historic perspective of its controversial subject. The book offers not only a better understanding of the recent "gambling craze," but also a fundamental inquiry into human nature and the structure of societies.
Reviews:
Trustpilot
Very Good

Gambling and Speculation: A Theory, a History, and a Future of some Human Decisions by Reuven Brenner (Professor, Universite de Montreal)

Gambling and Speculation takes the long, historic perspective of its controversial subject. The book offers not only a better understanding of the recent "gambling craze," but also a fundamental inquiry into human nature and the structure of societies. The Brenners argue that the negative image of gamblers and of speculators stems from prejudice, whose roots are in the distant, forgotten past. Legal scholars have frequently confused gambling with speculation and the anti-gambling laws were, at times, erroneously interpreted as implying the prohibitions of contracts in futures and insurance markets. One consequence of all this confusion was that during this century both in the United States and England, the legislation and law on betting and gambling became ambiguous. The authors touch on this issue and make policy recommendations: to abolish restrictions on the industry, diminish the states' role in selling lotteries, and, at the same time, make legal distinctions capable of helping the tiny percentage of players who might be "addicted."

'Brenner's is the best book ever written on gambling.' David R. Steele, Liberty
"Gambling and Speculation presents an intelligent advocacy position in favor of the legalization of gambling. It pulls together information that is fascinating from both an historic perspective and a traditional economic perspective. The book is a significant contribution to the growing body of serious literature dealing with the phenomenon of gambling." William R Eadington, University of Nevada, Reno; Director, Institute for the Study of Gambling and Commercial Gaming
"Brenner is one of the freshest writers I have read in economics, willing to introduce himself into his prose and express (sometimes outrageous) opinions. I like to read him." Richard C. Rockwell, Social Science Research Council
"This is a novel defense of an unfamiliar proposition, advocating the legalization of gambling. The argument of the book is easy to follow and, as usual with Brenner, he is provocative and interesting. His historical remarks bring forth much that I did not know, and , needless to say, the theme of gambling and its appropriate social role is significant and topical." William H. McNeill, University of Chicago
"...a very provocative discussion which should prove enlightening to all readers. Given the current debate over lotteries in many states, this work is recommended reading for policy makers and lay readers who desire more background on this timely topic." Roger Tutterow, Southern Economic Journal

GOR005207245
Gambling and Speculation: A Theory, a History, and a Future of some Human Decisions by Reuven Brenner (Professor, Universite de Montreal)
Reuven Brenner (Professor, Universite de Montreal)
Used - Very Good
Hardback
Cambridge University Press
1990-03-30
298
0521381800
9780521381802
N/A
Book picture is for illustrative purposes only, actual binding, cover or edition may vary.
This is a used book - there is no escaping the fact it has been read by someone else and it will show signs of wear and previous use. Overall we expect it to be in very good condition, but if you are not entirely satisfied please get in touch with us.