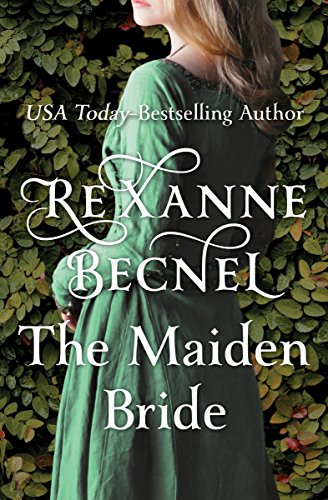 The Maiden Bride
by Rexanne Becnel

The Maiden Bride by Rexanne Becnel

A noblewoman takes her twin's place in marriage to a Norman invader in this "absorbing, sexually charged" medieval romance from a USA Today-bestselling author (Publishers Weekly).

All her life, Linnea de Valcourt has been reviled as the cursed daughter of Maidenstone Castle. The younger of identical twins, she narrowly escaped a death sentence at birth. To save her beloved sister from marriage to the savage Norman conqueror who has laid siege to their castle, Linnea will sacrifice her own happiness by engaging in a dangerous deception.

Years of exile have driven Axton de la Manse to the brink of despair. Now he will have his vengeance by taking his enemy's most prized possession, his eldest daughter. Once they wed and she is carrying the de la Manse heir, no one can dispute his claim to Maidenstone, the stronghold stolen from his family. That is, until the unthinkable happens: He loses his heart to his bride, whose own desires ignite a fierce longing deep within Axton. Is their growing love enough to overcome the lies and treachery that could drive them apart?

With enthralling characters, passionate romance, and spellbinding adventure, the award-winning author of The Matchmaker and The Bridemaker "demonstrates that she is a master of her craft" (RT Book Reviews).

"An absorbing, sexually charged tale of revenge and redemption. . . . The tension between husband and surrogate wife is unrelenting as they torment and gradually come to love each other, with the heroine's deception powering an exciting climax." -Publishers Weekly

"An intense story that deserves to be read." -AllAboutRomance.com

"Becnel combines heartfelt emotions with a romance that touches readers with the magic and joy of falling in love." -Romantic Times on Heart of the Storm

Rexanne Becnel is the author of more than twenty historical romance and contemporary mainstream novels, many of which appeared on the USA Today bestseller list. With the publication of her first novel, My Gallant Enemy, Becnel won the Waldenbooks Award for Best First-Time Romance Author and the Romantic Times Award for Best Medieval Romance by a New Author. While growing up, Becnel lived for a time in Germany and England, where she became fascinated by medieval history. After studying architecture at the University of Southwestern Louisiana, she worked as a building inspector for the Vieux Carre Commission, the agency of the City of New Orleans charged with protecting and preserving the distinct architectural and historic character of the French Quarter. Becnel lives in New Orleans with her husband and two children.

GOR010610487
The Maiden Bride by Rexanne Becnel
Rexanne Becnel
Used - Very Good
Paperback
Open Road Media
2018-11-29
328
1504051971
9781504051972
N/A
Book picture is for illustrative purposes only, actual binding, cover or edition may vary.
This is a used book - there is no escaping the fact it has been read by someone else and it will show signs of wear and previous use. Overall we expect it to be in very good condition, but if you are not entirely satisfied please get in touch with us.