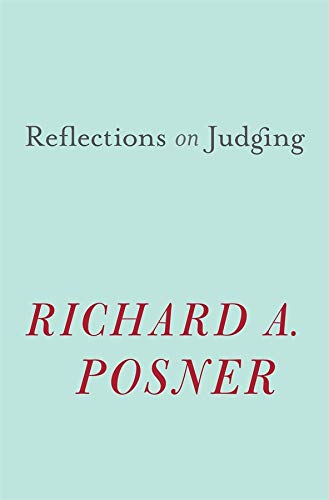 Reflections on Judging
by Richard A. Posner

In Stock
$34.99
Presents the main obstacles to coping with the dizzying pace of technological advance. The author calls for legal realism - gathering facts, considering context, and reaching a sensible conclusion that inflicts little collateral damage on other areas of the law.
Very Good
Only 1 left

Reflections on Judging by Richard A. Posner

In Reflections on Judging, Richard Posner distills the experience of his thirty-one years as a judge of the United States Court of Appeals for the Seventh Circuit. Surveying how the judiciary has changed since his 1981 appointment, he engages the issues at stake today, suggesting how lawyers should argue cases and judges decide them, how trials can be improved, and, most urgently, how to cope with the dizzying pace of technological advance that makes litigation ever more challenging to judges and lawyers.

For Posner, legal formalism presents one of the main obstacles to tackling these problems. Formalist judges--most notably Justice Antonin Scalia--needlessly complicate the legal process by advocating "canons of constructions" (principles for interpreting statutes and the Constitution) that are confusing and self-contradictory. Posner calls instead for a renewed commitment to legal realism, whereby a good judge gathers facts, carefully considers context, and comes to a sensible conclusion that avoids inflicting collateral damage on other areas of the law. This, Posner believes, was the approach of the jurists he most admires and seeks to emulate: Oliver Wendell Holmes, Louis Brandeis, Benjamin Cardozo, Learned Hand, Robert Jackson, and Henry Friendly, and it is an approach that can best resolve our twenty-first-century legal disputes.

Reflections on Judging...is about what judges should do when confronted with complexity. Like the rest of us, judges face an increasingly bewildering world, marked by daily advances in such areas as social media, the sciences and globalization. Unlike the rest of us, judges must make decisions that enforce their understanding--or misunderstanding--of that complexity onto millions... [Posner's] willingness to speak to his readers--judges or otherwise--as a jurist with three decades of experience is a strength of this book... Reflections on Judging is spangled with legal cases in which Posner, faced with disorder, triumphantly cuts through the noise... In Richard A. Posner, our generation has its Learned Hand, its Henry Friendly. In complex times, we can take comfort in the simple fact of his existence.-- (11/10/2013)

About Richard A. Posner

Richard A. Posner retired as a judge of the United States Court of Appeals for the Seventh Circuit in 2017. He is a senior lecturer at the University of Chicago Law School.

GOR006445011
Reflections on Judging by Richard A. Posner
Richard A. Posner
Used - Very Good
Hardback
Harvard University Press
2013-10-04
400
0674725085
9780674725089
N/A
Book picture is for illustrative purposes only, actual binding, cover or edition may vary.
This is a used book - there is no escaping the fact it has been read by someone else and it will show signs of wear and previous use. Overall we expect it to be in very good condition, but if you are not entirely satisfied please get in touch with us.