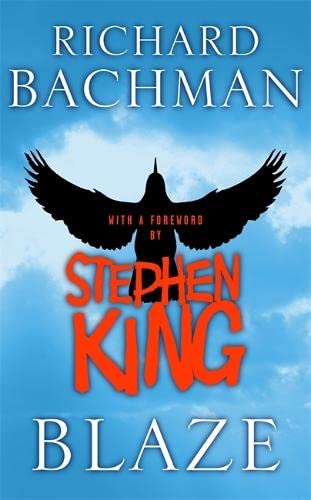 In Stock
$10.69
An exciting Stephen King novel - written months before CARRIE under his Bachman pseudonym - has just been discovered and will be published for the first time ever. A heartstopping thriller reminiscent of OF MICE AND MEN with the power of a noir fable.
Very Good Good
9 in stock

Clay Blaisdell is one big mother, but his capers are strictly small-time until his mentor introduces him to the one big score that every small-timer dreams of: kidnap. But now the brains of the operation has died - or has he? - and Blaze is alone with a baby as hostage. The Crime of the Century just turned into a race against time in the white hell of the Maine woods.

Storytelling - the ability to make the listener or the reader need to know, demand to know, what happens next - is a gift. Stephen King, like Charles Dickens before him, has this gift in spades * The Times on CELL *
'Thrilling, genuinely terrifying, beautifully textured and full of wonderful invention' * Daily Mail on LISEY'S STORY *
'A consummate and compassionate novel - one of King's very best' * Guardian on LISEY'S STORY *

In his 'lifetime', Richard Bachman published five novels. A sixth, THE REGULATORS, was published after he died of pseudonym cancer (a relatively painless way to go) in 1985. He developed a cult following both before and after his death. Two of his novels (THINNER and THE RUNNING MAN) were made into motion pictures. This novel--both brutal and sensitive--is his final legacy. The last of the Bachman novels, written in 1973 and published for the first time. Stephen King's 'dark half' may have saved the best for last.

GOR001226475
Blaze by Richard Bachman
Richard Bachman
Used - Very Good
Hardback
Hodder & Stoughton General Division
2007-06-12
336
0340952229
9780340952221
N/A
Book picture is for illustrative purposes only, actual binding, cover or edition may vary.
This is a used book - there is no escaping the fact it has been read by someone else and it will show signs of wear and previous use. Overall we expect it to be in very good condition, but if you are not entirely satisfied please get in touch with us.