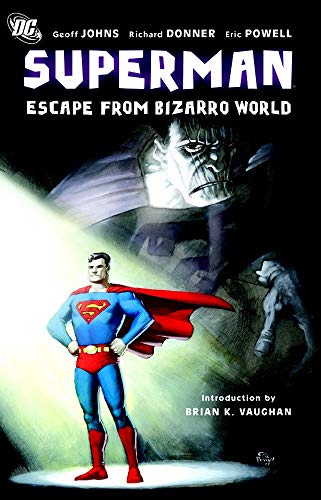 Written by Geoff Johns and Richard Donner, Otto Binder, E. Nelson Bridwell and John Byrne Art by Eric Powell, Wayne Boring, Curt Swan, John Byrne and others Cover by Eric Powell The dynamic writing team of Geoff Johns and Richard Donner joins artist Eric Powell (The Goon) for "Escape from Bizarro World," a 3-part story in which Bizarro returns to kidnap one of the most important people in Superman's life. But what does the twisted, ersatz Man of Steel want? The only way to find out is to travel to the enemy's home: Bizarro World! Also included in this volume are classic tales of Bizarro from SUPERMAN #140, DC COMICS PRESENTS #71 and MAN OF STEEL #5! Advance-solicited; on sale May 6 * 160 pg, FC, $14.99 US

"Geoff Johns is one of today's premier comics writers."

Geoff Johns is an award-winning writer and one of the most popular contemporary comic book writers today. Johns is the author of The New York Times bestselling graphic novels Aquaman: The Trench, Blackest Night, Green Lantern: Sinestro Corps War, Justice League: Origin, Superman: Brainiac and Batman: Earth One which hit #1 on the bestseller list. He is also known for transforming Green Lantern into one of the most critically and commercially successful franchises in comics.

GOR006890799
Superman Escape From Bizarro World by Richard Donner
Richard Donner
Used - Very Good
Paperback
DC Comics
2009-05-06
160
1401220339
9781401220334
N/A
Book picture is for illustrative purposes only, actual binding, cover or edition may vary.
This is a used book - there is no escaping the fact it has been read by someone else and it will show signs of wear and previous use. Overall we expect it to be in very good condition, but if you are not entirely satisfied please get in touch with us.