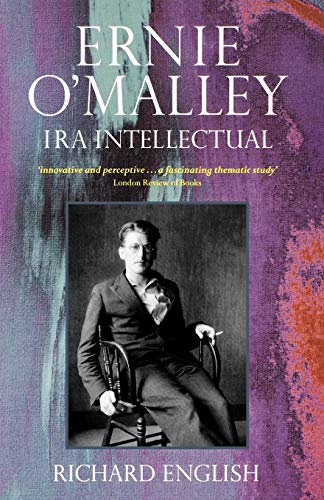 Ernie O'Malley
by Richard English (Director of the Centre for the Study of Terrorism and Political Violence, University of St Andrews)

Used Price
$15.49
Free Shipping in the US
This biography introduces Ernie O'Malley, whose post-revolutionary life was as turbulent as his IRA years. It also illustrates many persistent themes of Irish history, ranging from the origins and culture of militant republicanism to the development of intellectual and artistic life.
Reviews:
Trustpilot
Very Good

Ernie O'Malley: IRA Intellectual by Richard English (Director of the Centre for the Study of Terrorism and Political Violence, University of St Andrews)

Ernie O'Malley (1897-1957) was one of the most talented and colourful of modern Irish republicans. An important IRA leader in the 1916-1923 Irish Revolution, this bookish gunman subsequently became a distinguished intellectual, and the author of two classic autobiographical accounts of the revolutionary period: On Another Man's Wound and The Singing Flame. His post-revolutionary life took on a bohemian flavour. Travelling extensively in Europe and America, he mixed with a wide range of artistic and literary figures, and devoted himself to a variety of writing projects. In his IRA career he mixed with revolutionaries such as Michael Collins and Eamon de Valera; in his post-IRA years his friends included Samuel Beckett, Louis MacNeice, John Wayne, and John Ford. This important new thematic biography draws on previously unseen archival sources, and introduces O'Malley to both scholarly and general readers. O'Malley's post-revolutionary life was as turbulent as his IRA years, and illuminates many persistent themes of Irish history, ranging from the origins and culture of militant republicanism and the complexities of Anglo-Irish relations to the development of intellectual and artistic life in twentieth-century Ireland. This exciting new biography will be essential reading for anyone seeking to understand the background to modern Irish politics and the past and present role of the IRA.

a fascinating and revealing account of a man who was considered by many to be unique and yet also was an emblem of his whole revolutionary generation. * Martina Evans, Irish Post, 7th Oct. 2000. *
a small, well-crafted miniature portrait of an intriguing, unique Irish hero. * Ernie O'Malley, Irish Independent (Dublin) *
Richard English succeeds very well in showing that O'Malley was far more than simply the cranky autodidact which he sometimes appeared to people who knew him in the 1940s and 1950s ... fascinating book. * Eunan O'Halpin, Irish Political Studies 1988 *
'innovative and perceptive...a fascinating thematic study' Roy Foster, London Review of Books
'This well researched book is consistently moving and often wise. As the people of Ireland come to terms with overlapping identities, they will have much to learn from it' Declan Kiberd, Times Literary Supplement
In his biography of O'Malley ... Richard Englsish fills out the facts of life in some detail: he is plainly fascinated by O'Malley, appears to have read everything written on or around the period, and he received much help from the O'Malley family and was given access to papers. * John McGahern, The Irish Times (Dublin) *
fine biography. * Brendan O Cathaoir, Irish Times 13/11/99 *
an impressive job ... he has written an intelligent, scholarly and enjoyable book. * Peter McDermott, Irish Echo, New York *
Richard English's cool, elegant prose and subtle argumentation raise this book above sectarian politics and provide academics, students, and the general reader with a fascinating insight into Irish republican thought and practice between the Easter Rising and the 1950s ... It is a biography which is pleasing to read, and will inevitably provoke students into taking more seriously the thought of Irish republicanism. * Joanna Bourke, Birkbeck College, Twentieth Century British History, vol 10, no 1, 1999 *

ABBREVIATIONS. 1. THE LIFE. 2. THE REVOLUTIONARY. 3. THE INTELLECTUAL. 4. THE COMPANION. 5. THE LEGACIES. BIBLIOGRAPHY. INDEX.