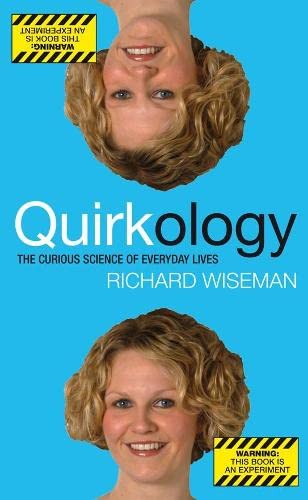 In Stock
$8.19
From the bestselling author of 59 Seconds
Very Good
5 in stock

Quirkology: The Curious Science Of Everyday Lives by Richard Wiseman

Ever wondered why bad musicians always win the Eurovision Song Contest, or how incompetent politicians get elected?

You need some Quirkology in your life.

While other scientists beaver away on obvious problems, Richard Wiseman has been busy uncovering the secret ingredients of charisma, exploring how our personalities are shaped by when we are born and examining why people usually miss the obvious signs of their partner's infidelity. Using scientific methods to investigate offbeat topics that interest the general public as well as the scientific community, Quirkology brings a new understanding to the backwaters of the human mind and takes us to places where mainstream scientists fear to tread. Comparable to Freakonomics, but British, far more populist, and a lot funnier.

How does your surname influence your life?

What does the way you walk reveal about your personality?

Why should women have men write their personal ads?

What is the funniest joke in the world?

Richard Wiseman is Britain's only professor for the Public Understanding of Psychology and has an international reputation for his research into unusual areas including deception, luck, humour and the paranormal. He is the psychologist most frequently quoted by the British media and his research has been featured on over 150 television programmes in the UK. He is regularly heard on Radio 4 and feature articles about his work have appeared prominently throughout the national press.

GOR001245557
Quirkology: The Curious Science Of Everyday Lives by Richard Wiseman
Richard Wiseman
Used - Very Good
Hardback
Pan Macmillan
2007-05-04
320
0330448129
9780330448123
N/A
Book picture is for illustrative purposes only, actual binding, cover or edition may vary.
This is a used book - there is no escaping the fact it has been read by someone else and it will show signs of wear and previous use. Overall we expect it to be in very good condition, but if you are not entirely satisfied please get in touch with us.