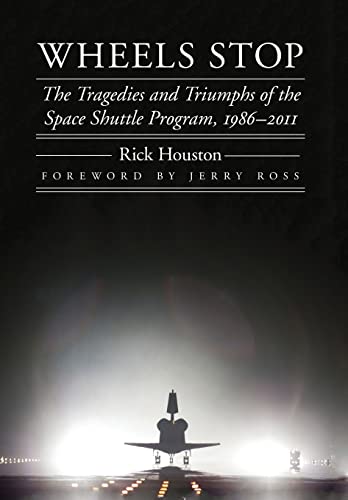 Used Price
$33.99
Free Shipping in the US
Tells the heart-wrenching story of the Columbia tragedy and the loss of the magnificent STS-107 crew.
Very Good

Wheels Stop: The Tragedies and Triumphs of the Space Shuttle Program, 1986-2011 by Rick Houston

Humanity's first reusable spacecraft and the most complex machine ever built, NASA's Space Shuttle debuted with great promise and as a dependable source of wonder and national pride. But with the Challenger catastrophe in 1986, the whole Space Shuttle program came into question, as did NASA itself, so long an institution that was seemingly above reproach. Wheels Stop tells the stirring story of how, after the Challenger disaster, the Space Shuttle not only recovered but went on to perform its greatest missions. From the Return to Flight mission of STS-26 in 1988 to the last shuttle mission ever on STS-135 in 2011, Wheels Stop takes readers behind the scenes as the shuttle's crews begin to mend Cold War tensions with the former Soviet Union, conduct vital research, deploy satellites, repair the Hubble Space Telescope, and assist in constructing the International Space Station. It also tells the heart-wrenching story of the Columbia tragedy and the loss of the magnificent STS-107 crew.

As complex as the shuttle was, the people it carried into orbit were often more so-and this is their story, too. Close encounters with astronauts, flight controllers, and shuttle workers capture the human side of the Space Shuttle's amazing journey-and invite readers along for the ride.

"[An] enthusiastic portrayal of the heroic age of American space travel."-Publishers Weekly * Publishers Weekly *
"Houston focuses on themes and makes extensive (and effective) use of oral histories provided by astronauts and others."-J. Z. Kiss, CHOICE -- J. Z. Kiss * CHOICE *
"Houston preserves the candid reflections of some who wrote the shuttle's story aloft, and their exultations and confessions are reason enough to fly with them until "wheels stop.""-Air and Space * Air and Space *

"With the Space Shuttle program now at an end, documenting the amazing thirty-year career of these iconic orbiters holds an untold amount of historical importance. Spaceflight isn't easy, people pay in blood and sweat to make it happen. Author Rick Houston lends a voice to some of the key people involved in what is not only an American treasure but a global superstar."-Chris Bergin, managing editor, NASASpaceflight.com

"Rick Houston skillfully recounts the shuttle program from a front row center seat, full of engaging, first person accounts-direct from the flight deck and the vacuum of space during some of the program's wildest spacewalks. From triumph to tragedy and back again, this book is the next best thing to being there."-Dr. Scott Parazynski, five-time shuttle astronaut and Everest mountaineer

Rick Houston, a full-time journalist for more than twenty years, is the author of Second to None: The History of the NASCAR Busch Series and Man on a Mission: The David Hilmers Story and a contributor to Footprints in the Dust: The Epic Voyages of Apollo, 1969-1975 (Nebraska, 2010). Jerry Ross, a former astronaut, shares the world record for the most spaceflights flown with seven to his credit. He is the author of Spacewalker.

List of Illustrations
Foreword
Acknowledgments
Introduction
1. Back in the Game
2. Cloak and Dagger, Science on Orbit
3. Hubble Huggers
4. Sleeping with the Enemy
5. A Home on Orbit
6. "The Debris was Talking to Me"
7. We Came Home
8. A Kick in the Pants
9. The End of an Era
10. A Magnificent Machine
Epilogue
Sources
Index

GOR005683215
Wheels Stop: The Tragedies and Triumphs of the Space Shuttle Program, 1986-2011 by Rick Houston
Rick Houston
Outward Odyssey: A People's History of Spaceflight
Used - Very Good
Hardback
University of Nebraska Press
2013-12-01
456
0803235348
9780803235342
N/A
Book picture is for illustrative purposes only, actual binding, cover or edition may vary.
This is a used book - there is no escaping the fact it has been read by someone else and it will show signs of wear and previous use. Overall we expect it to be in very good condition, but if you are not entirely satisfied please get in touch with us.