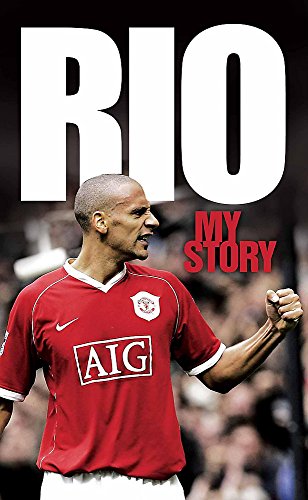 Used Price
$6.99
Free Shipping in the US
The biggest and most provocative sports book of 2007
Reviews:
Trustpilot
Very Good

Rio Ferdinand is widely acknowledged as one of the most talented and skilful defenders in the world. His transfer from West Ham to Leeds was a British record at the time, a feat he achieved again with his subsequent move to Manchester United. Ferdinand's success on the pitch has been meteoric; including high drama in the Champions League, three World Cups and a dramatic Premiership victory.

Here, for the very first time, Ferdinand reveals all about his infamous missed drugs test, the controversies surrounding both his transfers, his supposed reluctance to re-sign for United in 2005, the alleged tapping-up meeting with Chelsea's Peter Kenyon and various tabloid headlines involving partying and women.

'...a very good read. The portrait he paints of life on the cusp of stardom is brilliant' * Paul Kimmage, Sunday Times *
'...a sex, drugs and rock and roll account of his career' * Shoot *
'...explosive... a fascinating life both on and off the pitch' * Sun *
'...there is a fascination in the way he reveals the details of the modern celebrity footballer's lifestyle' * John Dillon Daily Express *

Born in Peckham, Ferdinand signed for West Ham as a schoolboy, turning professional at the age of 17. He played 158 games for the Hammers before transferring to Leeds United in November 2000, with whom he reached the Champions League semi-final in 2001. Following his star performance in the 2002 World Cup, he joined Manchester United. He made his England debut in November 1997 and was one of the team's best performers in the 2006 World Cup. He has won 56 caps.

GOR001281312
Rio by Rio Ferdinand
Rio Ferdinand
Used - Very Good
Paperback
Headline Publishing Group
2007-06-28
480
0755315332
9780755315338
N/A
Book picture is for illustrative purposes only, actual binding, cover or edition may vary.
This is a used book - there is no escaping the fact it has been read by someone else and it will show signs of wear and previous use. Overall we expect it to be in very good condition, but if you are not entirely satisfied please get in touch with us.