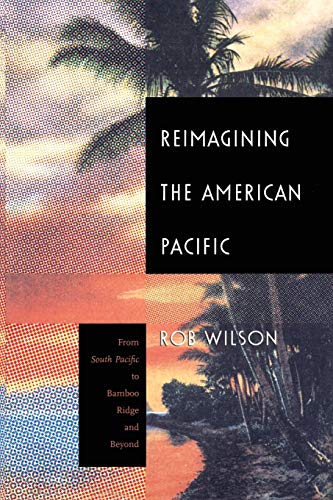 Used Price
$11.39
Free Shipping in the US
Explores the creation of the Pacific Rim in the American imagination and how the concept has been adapted and resisted in Hawai'i, the Pacific Islands, New Zealand, and Australia. This title draws on theories of postmodernism, transnationality, and post-Marxist geography to contribute to the discussion of what constitutes 'global' and 'local'.
Reviews:
Trustpilot
Very Good

Reimagining the American Pacific: From South Pacific to Bamboo Ridge and Beyond by Rob Wilson

In this compelling critique Rob Wilson explores the creation of the "Pacific Rim" in the American imagination and how the concept has been variously adapted and resisted in Hawai'i, the Pacific Islands, New Zealand, and Australia. Reimagining the American Pacific ranges from the nineteenth century to the present and draws on theories of postmodernism, transnationality, and post-Marxist geography to contribute to the ongoing discussion of what constitutes "global" and "local."
Wilson begins by tracing the arrival of American commerce and culture in the Pacific through missionary and imperial forces in the nineteenth century and the parallel development of Asia/Pacific as an idea. Using an impressive range of texts-from works by Herman Melville, James Michener, Maori and Western Samoan novelists, and Bamboo Ridge poets to Baywatch, films and musicals such as South Pacific and Blue Hawaii, and native Hawaiian shark god poetry-Wilson illustrates what it means for a space to be "regionalized." Claiming that such places become more open to transnational flows of information, labor, finance, media, and global commodities, he explains how they then become isolated, their borders simultaneously crossed and fixed. In the case of Hawai'i, Wilson argues that culturally innovative, risky forms of symbol making and a broader-more global-vision of local plight are needed to counterbalance the racism and increasing imbalance of cultural capital and goods in the emerging postplantation and tourist-centered economy.
Reimagining the American Pacific leaves the reader with a new understanding of the complex interactions of global and local economies and cultures in a region that, since the 1970s, has been a leading trading partner of the United States. It is an engaging and provocative contribution to the fields of Asian and American studies, as well as those of cultural studies and theory, literary criticism, and popular culture.

"At ease with the interface of the local and global, Rob Wilson flies in and out of Asia and the Pacific. As he rediscovers and redefines the continent, islands and waters, he constantly rereads America. Such a geographic venture is also an exercise in de-disciplining. Circulating freely among literature, culture, economics, politics, history, and media, Wilson's imagination and judgment are shrewd, sardonic, zestful, zany, and delightful. Reimagining the American Pacific is a thoroughly rewarding book."-Masao Miyoshi, University of California, San Diego
"Lyrical and disruptive, Wilson's book masterfully dismantles multiple and contradictory imaginings of "the Pacific" and recovers the psychic longings, material histories, and politics that have variously produced the modern "Asia Pacific." This book wrenches American studies out of any lingering continent-bound complacency, gives a much needed broader scope to Asian American studies, and discloses crucial blind-spots in Asian area studies. Highly recommended for scholars in all these areas, as well as cultural studies in general."-David Palumbo-Liu, author of Asian/American: Historical Crossings of a Racial Frontier

Rob Wilson is Professor of Literature at the University of California, Santa Cruz. He is the author of numerous books including American Sublime: The Genealogy of a Poetic Genre and several volumes of poetry, and coeditor of Global/Local: Cultural Production and the Transnational Imaginary and of Asia/Pacific as Space of Cultural Production, both published by Duke University Press.

Preface: Searching for "the Local": Hawai'i as Miss Universe?
Introduction: "How Did You Find America?": On Becoming Asia/Pacific
1. Imagining "Asia-Pacific" Today: Forgetting Colonialisms in the Magical Waters of the Pacific


6. Shark God on Trial: Invoking Chief Ka-lani-o'pu'u in the Local/Indigenous/American Struggle for Place


7. Good-Bye Paradise: Theorizing Place, Poetics, and Cultural Production in the American Pacific
8. Becoming Global and Local in the U.S. Transnational Imaginary of the Pacific

Coda: Part Italian, Part Many Things Else: Creating "Asia/Pacific" along a Honolulu-Taipei Line of Flight

CIN000404407
Reimagining the American Pacific: From South Pacific to Bamboo Ridge and Beyond by Rob Wilson
Rob Wilson
New Americanists
Used - Very Good
Paperback
Duke University Press
2000-07-01
320
0822325233
9780822325239
N/A
Book picture is for illustrative purposes only, actual binding, cover or edition may vary.
This is a used book - there is no escaping the fact it has been read by someone else and it will show signs of wear and previous use. Overall we expect it to be in very good condition, but if you are not entirely satisfied please get in touch with us.