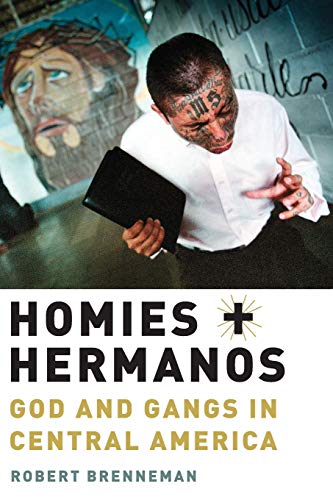 Used Price
$22.99
Free Shipping in the US
Using the tools of sociological theory, Robert Brenneman seeks to discover why a pot-smoking, gun-wielding "homie" gang member would want to trade in la vida loca for a Bible and the buttoned-down lifestyle of an evangelical hermano (brother in Christ) - and to what extent this strategy works for the many youth who have tried it.
Reviews:
Trustpilot
Very Good

Why would a gun-wielding, tattoo-bearing "homie" trade in la vida loca for a Bible and the buttoned-down lifestyle of an evangelical hermano (brother in Christ)? To answer this question, Robert Brenneman interviewed sixty-three former gang members from the "Northern Triangle" of Central America-Guatemala, El Salvador, and Honduras-most of whom left their gang for evangelicalism. Unlike in the United States, membership in a Central American gang is hasta la morgue. But the most common exception to the "morgue rule" is that of conversion or regular participation in an evangelical church. Do gang members who weary of their dangerous lifestyle simply make a rational choice to opt for evangelical religion? Brenneman finds this is only partly the case, for many others report emotional conversions that came unexpectedly, when they found themselves overwhelmed by a sermon, a conversation, or a prayer service. An extensively researched and gritty account, Homies and Hermanos sheds light on the nature of youth violence, of religious conversion, and of evangelical churches in Central America.

A courageous scholar, Brenneman has undertaken extensive interviews with former members of some of Central America's most lethal street gangs who have converted to evangelical and Pentecostal Christianity...This well-written book reveals much about the appeal of contemporary evangelical churches. It also provides a terrifying picture of an impoverished and exceptionally violent setting. * The Christian Century *
The the book is a remarkable study, rigorous in its methodology, thorough in its scope, and penetrating in its insights. As a bonus, it's accessible without dumbing-down and learned without getting wonky. * Rudy Nelson, Books & Culture *
A fascinating window into how street-tough gangbangers abandon the vida loca for evangelical Christianity, trading one set of identity markers, community, and mores for another. Homies and Hermanos describes how religious conversion provides Central American pandilleros with one of the only ways to leave gang life that does not end in the morgue. Beautifully written and compellingly told! * Virginia Garrard-Burnett, author of Terror in the Land of the Holy Spirit: Guatemala under General Efrain Rios Montt, 1982-1983 *
Brenneman provides a new twist in the gang literature: the surprising parallels between emotional rituals and public display of symbols in both the violent gangs and evangelical churches of Central America. These are the poles of attraction in a market for emotional energy, allowing ex-gang members an escape from membership-to-the-death if they show genuine conversion that the gang respects. In this ritual economy, only one powerful ritual can substitute for another. Brenneman's time-oriented, processual approach advances both theory and practice. * Randall Collins, author of Violence: A Micro-Sociological Theory *
Brenneman draws on interviews with former gang members from El Salvador, Guatemala, and Honduras who left gang life for evangelical Christianity. * The Chronicle Review *
Homies and Hermanos provides a valuable account of how religious institutions in Central America respond to local gang violence, and more importantly, carefully analyzes the process gang members use to transition from gang life to church life. * Patrick Lopez-Aguado, Social Forces *

Robert Brenneman is Assistant Professor of Sociology at St. Michael's College in Colchester, Vermont. He is the author of Faith and the Foreigner.