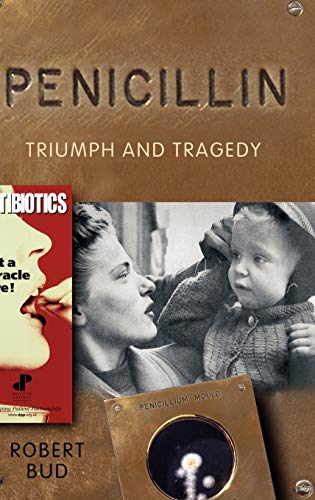 Used Price
28,99 $
Free Shipping in the US
Sets the discovery and use of penicillin in the context of social and cultural change across the world. This book examines the drug's critical contributions to medicine and agriculture, and investigates the global spread of resistant bacteria as antibiotic use continues to rise. It is of interest to historians, scientists, and others.
Reviews:
Trustpilot
Very Good

Penicillin is the drug of the twentieth century. It was the first of the antibiotics that, for decades after the Second World War, underpinned a popular belief that infectious disease had at last met its match. With the emergence of 'superbugs' in recent decades these hopes have faded. Across the world, we are warned that widespread antibiotic abuse will inexorably erode the drugs' efficacy and our own earlier confidence in them. Penicillin pulls these different but conjoined stories into a compelling narrative spanning the second half of the twentieth century. Using a wealth of new research, Robert Bud sets the discovery and use of penicillin in the broader context of social and cultural change across the world. He examines the drug's critical contributions to medicine and agriculture, and he investigates the global spread of resistant bacteria as antibiotic use continues to rise. Clearly written and highly topical, his book will be of great interest to historians, scientists, and anyone wishing to understand penicillin's seismic impact on modern life. Penicillin: Triumph and Tragedy Curated by Robert Bud A new exhibition looking back over 50 years will explore changing attitudes to antibiotics and launch at the Science Museum on Thursday 10 May 2007 . In the 1950s antibiotics were cast as wonder drugs, but strains of bacteria resistant to penicillin were already widespread. They caused many deaths, most dramatically, infecting hospitalised victims of Asian flu in the autumn of 1957. Now we fear MRSA. How have attitudes, hopes and fears changed in half a century? Press information from Stephen Bromberg, Science Museum Press Office, stephen.bromberg@sciencemuseum.org.uk 020 7942 4352

[A] Terrific book. * History of Philosophy and Life Sciences *
...very impressive. * The Journal of BJHS *
...well written and based on outstanding research. * Journal of the Historical Association *
...an entensively researched and gripping saga...an enjoyable read...the story unfolds like a political thriller; the plot just as thrilling as the best fiction. * Dr Tina Matthews, The Bulletin of The Royal College of Pathologists *
Bud has an engaging and flowing style that allows him to tell the story in a thorough yet gripping way. This is a scholarly but very readable book; Bud's long-standing interest in the history of penicillin clearly shows in the depth and thoroughness of his analysis. * Stuart Anderson, Notes and Records of the Royal Society, 62, 335-336 *
A thorough and approachable review...a fascinating story. His prose is...precise and eminently authoritative. His data is superbly referenced. * John Dwyer, TLS *
...A fascinating overview of the development and marketing of penicillin. * Allen F Shaughnessy, British Medical Journal *
a compelling perspective on the achievements of 20th-century medicine, and how they have given rise to new challenges for the 21st. * Jon Turney, THES *
[An] insightful and thorough history. * Financial Times *
This is a serious and thorough text from OUP, with a number of important messages for doctors and patients alike. * Dr Jeremy Sager, Univadis Review *
...a story full of human interest that general readers will enjoy.
A highly detailed account of how we arrived at what may be the threshold of a post-antibiotic age, containing a wealth of medical and social history. * Jo Whelan, New Scientist *
This extremely well-written and exhaustively researched book is invaluable in understanding the story of penicillin * I. Richman, Choice Reviews Online *
Bud's volume offers much food for thought. * The Lancet *
Penicillin: Triumph and Tragedy is essential reading for anyone who wants to gain a complete view of the social history of penicillin and the story of medicine in the last half of the twentieth century, and Bud's book is unlikely to be bettered. * Social History of Medicine *
well written and based on outstanding research. * Christoph Gradmann, History, Magazine of the Historical Association *
Bud has provided a powerful social and cultural history of the paradigmatic postwar wonder drug, illuminating current debates on drug resistance. * BRUNO J. STRASSER, Historical Studies in the Natural Sciences *
Robert Bud offers a novel approach to the development of the "wonder drug" penicillin and its consequences. * Marlene Burns, Ambix. *

Introduction ; 1. Illness, drugs and wonder drugs before penicillin ; 2. Penicillin from organised science ; 3. Creating the brand in the era of propaganda ; 4. Making penicillin across the world ; 5. The carefree culture and the third industrial revolution ; 6. Fighting resistance with technology ; 7. Doctors, patients and the brand ; 8. Animals, resistance and committees ; 9. In face of catastrophe ; Conclusion