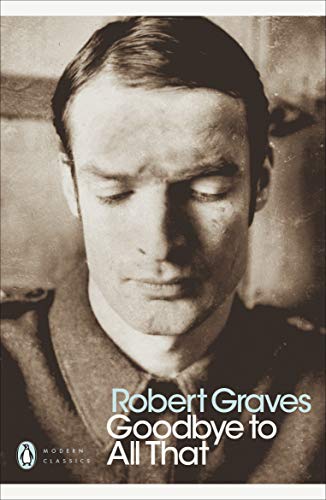 Goodbye to All That
by Robert Graves

In Stock
$7.19
In 1929 the author went to live abroad permanently, vowing 'never to make England my home again'. This book is an account of his life up until that 'bitter leave-taking': from his childhood and desperately unhappy school days at Charterhouse, to his time serving as a young officer in the First World War that was to haunt him throughout his life.
Like New Very Good Good
5 in stock

Goodbye to All That Summary

Goodbye to All That by Robert Graves

An autobiographical work that describes firsthand the great tectonic shifts in English society following the First World War, Robert Graves's Goodbye to All That is a matchless evocation of the Great War's haunting legacy, published in Penguin Modern Classics.

In 1929 Robert Graves went to live abroad permanently, vowing 'never to make England my home again'. This is his superb account of his life up until that 'bitter leave-taking': from his childhood and desperately unhappy school days at Charterhouse, to his time serving as a young officer in the First World War that was to haunt him throughout his life. It also contains memorable encounters with fellow writers and poets, including Siegfried Sassoon and Thomas Hardy, and covers his increasingly unhappy marriage to Nancy Nicholson. Goodbye to All That, with its vivid, harrowing descriptions of the Western Front, is a classic war document, and also has immense value as one of the most candid self-portraits of an artist ever written.

Robert Ranke Graves (1895-1985) was a British poet, novelist, and critic. He is best known for the historical novel I, Claudius and the critical study of myth and poetry The White Goddess. His autobiography, Goodbye to All That, was published in 1929, quickly establishing itself as a modern classic. Graves also translated Apuleius, Lucan and Suetonius for the Penguin Classics, and compiled the first modern dictionary of Greek Mythology, The Greek Myths. His translation of The Rubaiyat of Omar Khayyam (with Omar Ali-Shah) is also published in Penguin Classics.

If you enjoyed Goodbye to All That, you might like Ford Madox Ford's Parade's End, also available in Penguin Modern Classics.

Goodbye to All That Reviews

A remarkable book ... Essential reading for the centenary of the first world war--Guardian

One of the most candid self-portraits of a poet, warts and all, ever painted--The Times Literary Supplement

We see the dark heart of the book even more clearly, and hear it beating even more loudly, in this original edition than we do in the comparatively careful and considered terms of the later one--Andrew Motion

Robert Graves was born in 1895 in Wimbledon. He went from school to the First World War, where he became a captain in the Royal Welch Fusiliers and was seriously wounded at the Battle of the Somme. He wrote his autobiography, Goodbye to All That, in 1929, and it was soon established as a modern classic. He died on 7 December 1985 in Majorca, his home since 1929.

GOR006479388
Goodbye to All That by Robert Graves
Robert Graves
Penguin Modern Classics
Used - Like New
Paperback
Penguin Books Ltd
2000-09-28
288
0141184590
9780141184593
N/A
Book picture is for illustrative purposes only, actual binding, cover or edition may vary.
The book has been read, but looks new. The book cover has no visible wear, and the dust jacket is included if applicable. No missing or damaged pages, no tears, possible very minimal creasing, no underlining or highlighting of text, and no writing in the margins.