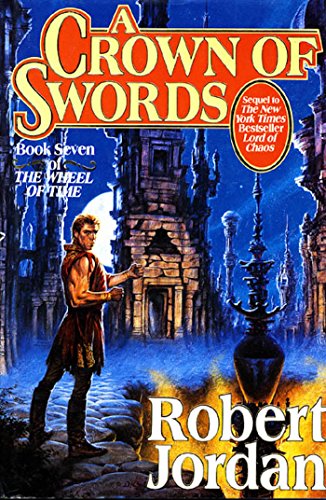 Crown of Swords
by Robert Jordan

Out of Stock
$10.99
The eagerly awaited sequel to Lord of Chaos. Elayne, Aviendha, and Mat comes ever closer to the bowl ter'angreal that may reverse the world's endless heat wave and restore natural weather. Egwene begins to gather all manner of women who can channel, and Rand faces the dread Forsaken Sammael, in the shadows of Shadar Logoth, where the blood-hungry mist Mashadar waits for prey.
Very Good
Only 0 left

Crown of Swords by Robert Jordan

In this volume, Elayne, Aviendha, and Mat come ever closer to the bowl ter'angreal that may reverse the world's endless heat wave and restore natural weather. Egwene begins to gather all manner of women who can channel - Sea Folk, Windfinders, Wise Ones, and some surprising others. And above all, Rand faces the dread Forsaken Sammael, in the shadows of Shadar Logoth, where the blood-hungry mist, Mashadar, waits for prey.

Praise for Robert Jordan and The Wheel of Time(R)

"Anyone who's writing epic of secondary world fantasy knows Robert Jordan isn't just a part of the landscape, he's a monolith within the landscape." --Patrick Rothfuss, author of the Kingkiller Chronicle series

"The Eye of the World was a turning point in my life. I read, I enjoyed. (Then continued on to write my larger fantasy novels.)" --Robin Hobb, author of the award-winning Realm of the Elderlings series

"Robert Jordan's work has been a formative influence and an inspiration for a generation of fantasy writers." --Brent Weeks, New York Times bestselling author of The Way of Shadows

"Jordan's writing is so amazing! The characterization, the attention to detail!" --Clint McElroy, co-creator of the #1 podcast The Adventure Zone

"[Robert Jordan's] impact on the place of fantasy in the culture is colossal... He brought innumerable readers to fantasy. He became the New York Times bestseller list face of fantasy." --Guy Gavriel Kay, author of A Brightness Long Ago

"Robert Jordan was a giant of fiction whose words helped a whole generation of fantasy writers, including myself, find our true voices. I thanked him then, but I didn't thank him enough." --Peter V. Brett, internationally bestselling author of The Demon Cycle series

"I don't know anybody who's been as formative in crafting me as a writer as [Robert Jordan], and for that I will be forever grateful." --Tochi Onyebuchi, author of Riot Baby and War Girls

"I've mostly never been involved in any particular fandom, the one exception of course was The Wheel of Time." --Marie Brennan, author of the Memoirs of Lady Trent series

"I owe Robert Jordan so much. Without him, modern fantasy would be bereft of the expansive, deep worlds and the giant casts which I love so dearly. It's not often I can look at another author and say: that person paved my way. But such is exactly the case with Jordan." --Jenn Lyons, author of The Ruin of Kings

"You can't talk about epic fantasy without acknowledging the titanic influence Robert Jordan has had on the grenre." --Jason Denzel, author of Mystic and founder of Dragonmount.com

"Jordan has come to dominate the world Tolkien began to reveal." --The New York Times

"The Wheel of Time [is] rapidly becoming the definitive American fantasy saga. It is a fantasy tale seldom equaled and still less often surpassed in English." --Chicago Sun-Times

"Hard to put down for even a moment. A fittingly epic conclusion to a fantasy series that many consider one of the best of all time." --San Francisco Book Review

"The most ambitious American fantasy saga [may] also be the finest. Rich in detail and his plot is rich in incident. Impressive work, and highly recommended." --Booklist

"Jordan has come to dominate the world that Tolkien began to reveal." --The New York Times

"Jordan is able to take ... familiar elements and make them his own, in a powerful novel of wide and complex scope. Open religious and political conflicts add a gritty realism, while the cities and courts provide plenty of drama and splendor. Women have a stronger role than in Tolkien.... Each character in this large cast remains distinct.... Their adventures are varied, and exciting.... The Eye of the World stands alone as a fantasy epic." --Locus

"Robert Jordan has created a fantasy world as tangible and credible as history. He has a fine eye for detail and a vivid sense of drama." --Morgan Llewelyn

"Robert Jordan's The Eye of the World proves that there's still plenty of life in the ancient tradition of epic fantasy. Jordan has a powerful vision of good and evil-- but what strikes me as most pleasurable about The Eye of the World is all the fascinating people moving through a rich and interesting world." --Orson Scott Card

"Jordan's world is rich in detail and his plot is rich in incident. Impressive work, and highly recommended." --ALA Booklist

Praise for A Crown of Swords

"The seventh volume of Jordan's bestselling high fantasy series carries on the ... colossal, dauntingly complex storytelling established by the previous entries ... Fans of the series will gobble down this generous addition." --Publishers Weekly (starred review)

"In the long-awaited sequel to the bestselling Lord of Chaos, Jordan returns to the [same] complex, detailed fantasy world ... Highly recommended ..." --Library Journal

"In the seventh volume of Jordan's preeminent high fantasy saga, intrigue and counter-intrigue continue to roil ... This latest installment of a major fantasy epic definitely will not disappoint its fans." --Booklist

ROBERT JORDAN (October 17, 1948-September 16, 2007) was born in Charleston, South Carolina. He taught himself to read when he was four with the incidental aid of a twelve-years-older brother, and was tackling Mark Twain and Jules Verne by five. He is a graduate of The Citadel, the Military College of South Carolina, with a degree in physics. He served two tours in Vietnam with the U.S. Army; among his decorations are the Distinguished Flying Cross with bronze oak leaf cluster, the Bronze Star with "V" and bronze oak leaf cluster, and two Vietnamese Gallantry Crosses with palm. A history buff, he has also written dance and theater criticism and enjoyed the outdoor sports of hunting, fishing, and sailing, and the indoor sports of poker, chess, pool, and pipe collecting.

Robert Jordan began writing in 1977 and went on to write The Wheel of Time(R), one of the most important and best selling series in the history of fantasy publishing with over 14 million copies sold in North America, and countless more sold abroad.

Robert Jordan died on September 16, 2007, after a courageous battle with the rare blood disease amyloidosis.

CIN000001721
Crown of Swords by Robert Jordan
Robert Jordan
Used - Very Good
Hardback
St Martin's Press
1996-05-15
684
0312857675
9780312857677
N/A
Book picture is for illustrative purposes only, actual binding, cover or edition may vary.
This is a used book - there is no escaping the fact it has been read by someone else and it will show signs of wear and previous use. Overall we expect it to be in very good condition, but if you are not entirely satisfied please get in touch with us.