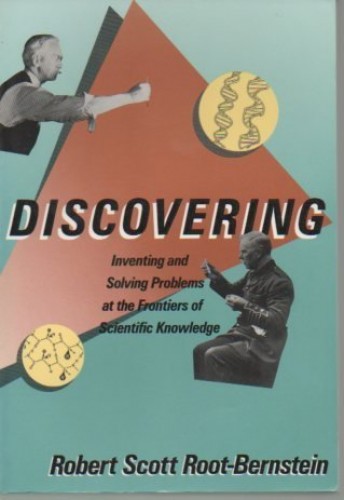 Used Price
$21.99
Free Shipping in the US
Looks at what scientists do, and shows science as the imaginative endeavour of the people who do it. Using a fictional format, the author unveils the discovery process in action through the discussions of six characters who debate the multifaceted issues at the core of scientific discovery.
Reviews:
Trustpilot
Very Good

Discovering: Inventing and Solving Problems at the Frontiers of Scientific Knowledge by Robert Scott Root-Bernstein

"Discovering" is an experimental work. It attempts not merely to look at what scientists do but to get inside their minds to find out how, to see science as the imaginative endeavour of the people who do it. Using a fictional format, the author unveils the discovery process in action through the discussions of six characters who attend a colloquium to debate the multifaceted issues that lie at the core of scientific creativity.

"Root-Bernstein has written an absorbing, stimulating, sometimes infuriating book, full of entertaining ideas, and everyone interested in science and its ways will benefit from reading it." --Walter Gratzer, "Nature"

"[Root-Bernstein] has written extensively on the subject of creativity, and here he draws together his extensive thinking on the subject. The result is an intriguing and extraordinarily important book...It is a work of great insight and sweep, and it should be the manifesto of great changes in education and science." --Lee Dembart, "Los Angeles Times"

"This highly original and imaginative book, in which the author masterfully marshals a dazzling array of evidence on behalf of his arguments, is by no means easy reading or suitable for browsing. However, anyone who is interested in discovering the roots of scientific creativity and in learning how this important but poorly understood phenomenon can be encouraged and fostered and who is willing to invest the time and effort to follow Root-Bernstein's exposition, will find this book most rewarding and thought-provoking." --George B. Kauffman, "Journal of Chemical Education"

CIN000461131
Discovering: Inventing and Solving Problems at the Frontiers of Scientific Knowledge by Robert Scott Root-Bernstein
Robert Scott Root-Bernstein
Used - Very Good
Paperback
Harvard University Press
1991-09-04
518
0674211766
9780674211766
N/A
Book picture is for illustrative purposes only, actual binding, cover or edition may vary.
This is a used book - there is no escaping the fact it has been read by someone else and it will show signs of wear and previous use. Overall we expect it to be in very good condition, but if you are not entirely satisfied please get in touch with us.