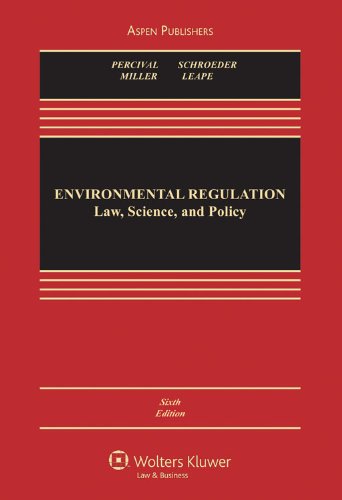 As the Obama administration and the courts change the course of federal environmental law and policy, this best-selling casebook has been updated comprehensively to include the latest legal and policy developments. Each chapter includes new material exploring contemporary developments including the challenges climate change is posing to nearly every aspect of environmental law.

The revised Sixth Edition includes: Ten New Case Excerpts, including new decisions by the U.S. Supreme Court on CERCLA, the Clean Air Act, NEPA, environmental standing and the Clean Water Act Four New Problem Exercises, including exercises on cap-and-trade versus a carbon tax, the application of NEPA to climate change, who should be prosecuted for criminal violations, and negotiation of a post-Kyoto regime to control greenhouse gas (GHG) emissions "Midnight Regulations" by the Bush administration and the Obama administration's response New emphasis on Environmental Standing, including the Supreme Court's Massachusetts v. EPA and Summers v. Earth Island Institute decisions The new approach to CERCLA "arranger" liability and apportionment embodied in the Supreme Court's Burlington Northern decision EPA's new definition of "solid waste" and judicial decisions altering the agency's new source review program and programs for controlling interstate air pollution and hazardous air pollutants EPA's Clean Air Act "Endangerment" Finding for Emissions of GHGs, reversal of the California waiver denial, and California's controls on GHG emissions from mobile sources The relationship between the Clean Water Act's 404 and 402 permit programs, including the Supreme Court's June 22, 2009 Coeur Alaska decision Climate Change and NEPA, including the 9th Circuit's Center for Biological Diversity v. NHTSA decision on the environmental impact of national fuel economy standards Remedies for Claims of NEPA Violations, including the Supreme Court's Winter v. NRDC decision Climate change and the Endangered Species Act, including the impact of the polar bear listing on agency consultation under 7 and 9's prohibition of "takes" The latest scientific evidence concerning global warming and climate change, as well as material on the development of carbon trading markets, adaptation strategies, and carbon disclosure

CIN000108938
Environmental Regulation: Law, Science, and Policy, Sixth Edition by Robert V Percival
Robert V Percival
Used - Very Good
Hardback
Aspen Publishers Inc.,U.S.
2009-08-01
1302
0735584621
9780735584624
N/A
Book picture is for illustrative purposes only, actual binding, cover or edition may vary.
This is a used book - there is no escaping the fact it has been read by someone else and it will show signs of wear and previous use. Overall we expect it to be in very good condition, but if you are not entirely satisfied please get in touch with us.