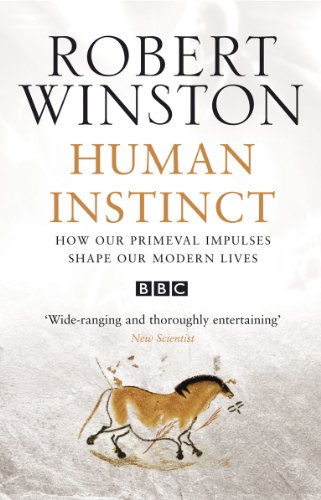 In Stock
$10.69
They explain why a happily married man will fantasize about the pretty, slim, young woman sitting across from him in the tube and why thousands of people spend their week entirely focused on whether their team will win their next crucial match.
Very Good Good
9 in stock

From caveman to modern man ... Few people doubt that humans are descended from the apes; fewer still consider, let alone accept, the psychological implications. But in truth, man not only looks, moves and breathes like an ape, he also thinks like one. Sexual drive, survival, competition, aggression - all of our impulses are driven by our human instincts. They explain why a happily married man will fantasize about the pretty, slim, young woman sitting across from him in the tube and why thousands of people spend their week entirely focused on whether their team will win their next crucial match. But how well do our instincts equip us for the twenty-first century? Do they help or hinder us as we deal with large anonymous cities, stressful careers, relationships and the battle of the sexes? In this fascinating book, Robert Winston takes us on a journey deep into the human mind. Along the way he takes a very personal look at the relationship between science and religion and explores those very instincts that make us human.

Robert Winston is one of the country's best-known scientists. As Professor of Fertility Studies at Imperial College, University of London, and Director of NHS Research and Development and Consultant Obstetrician and Gynaecologist at Hammersmith Hospital, he has made advances in fertility medicine and been a leading voice in the debate on genetic engineering. His television series, including Your Life in Their Hands, Making Babies, The Human Body, Superhuman and A Child Against All Odds have made him a household name across Britain. He became a life peer in 1995.

GOR001236904
Human Instinct by Robert Winston
Robert Winston
Used - Very Good
Paperback
Transworld Publishers Ltd
2003-09-27
432
0553814923
9780553814927
N/A
Book picture is for illustrative purposes only, actual binding, cover or edition may vary.
This is a used book - there is no escaping the fact it has been read by someone else and it will show signs of wear and previous use. Overall we expect it to be in very good condition, but if you are not entirely satisfied please get in touch with us.