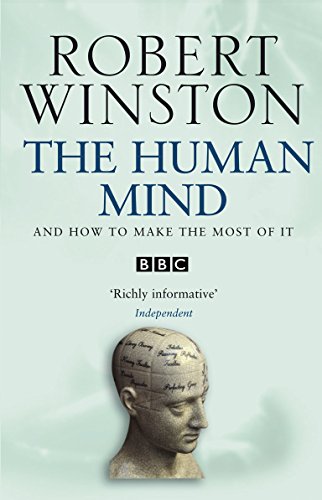 The Human Mind
by Robert Winston

In Stock
$10.99
He also tells us how to boost our intelligence, how to tap into creative powers we never knew we had, how to break old habits and keep our brain fit and active as we enter old age.
Very Good
6 in stock

The Human Mind by Robert Winston

It is the most complex and mysterious object in the universe. Covered by a dull grey membrane, it resembles a gigantic, convoluted fungus. Its inscrutability has captivated scientists, philosophers and artists for centuries. It is, of course, the human brain. With the help of science we can now begin to understand the extraordinary complexity of the brain's circuits: we can see which nerve cells generate electricity as we fall in love, tell a lie or dream of a lottery win. And inside the 100 billion cells of this rubbery network is something remarkable: you. In this entertaining and accessible book, Robert Winston takes us deep into the workings of the human mind and shows how our emotions and personality are the result of genes and environment. He explains how memories are formed and lost, how the ever-changing brain is responsible for toddler tantrums and teenage angst, plus he reveals the truth behind extra-sensory perception, deja vu and out-of-body experiences. He also tells us how to boost our intelligence, how to tap into creative powers we never knew we had, how to break old habits and keep our brain fit and active as we enter old age. The human mind is all we have to help us to understand it. Paradoxically, it is possible that science may never quite explain everything about this extraordinary mechanism that makes each of us unique.

Robert Winston is one of the country's best-known scientists. As Professor of Fertility Studies at Imperial College, University of London, and Director of NHS Research and Development and Consultant Obstetrician and Gynaecologist at Hammersmith Hospital, he has made advances in fertility medicine and been a leading voice in the debate on genetic engineering. His television series, including Your Life in Their Hands, Making Babies, The Human Body, Superhuman and Child Against All Odds and have made him a household name across Britain. He became a life peer in 1995.

GOR001241061
The Human Mind by Robert Winston
Robert Winston
Used - Very Good
Paperback
Transworld Publishers Ltd
2004-01-28
528
0553816195
9780553816198
N/A
Book picture is for illustrative purposes only, actual binding, cover or edition may vary.
This is a used book - there is no escaping the fact it has been read by someone else and it will show signs of wear and previous use. Overall we expect it to be in very good condition, but if you are not entirely satisfied please get in touch with us.