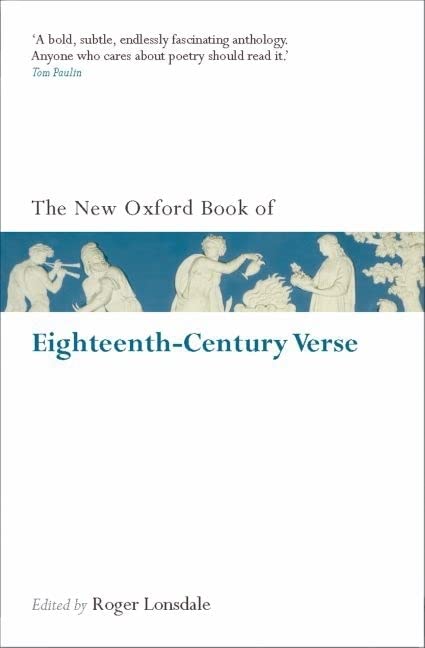 Used Price
$16.99
Free Shipping in the US
A stylish reissue of Roger Lonsdale's widely praised anthology of 18th-century poetry: no previous anthology has succeeded in illustrating so thoroughly the kinds of verse actually written in the eighteenth century.
Reviews:
Trustpilot
Very Good

No previous anthology has succeeded in illustrating so thoroughly the kinds of verse actually written in the eighteenth century. The familiar tradition is fully represented by selections from such poets as Pope, Swift, Tomson, Gray, Smart, Goldsmith, Cowper, Burns, and Blake. In addition, the anthology includes verse by many forgotten writers, both men and women, from all levels of society. Although they have never figured in conventional literary history, they wrote humorous, idiosyncratic, and graphic verse about their personal experience and the world around them, in a way that should challenge received ideas about the period's restraints and inhibitions.

Review from previous edition a major event...Forces a reappraisal of what 18th-century poetry is. * John Carey, Sunday Times *
a major anthology: one of the best that Oxford has ever produced. * James Fenton, The Times *
the most important anthology in recent years * The Economist *
indispensable * Kingsley Amis *
a bold, subtle, endlessly fascinating anthology which challenges the received view of 18th-century verse ... The result is a living text that bustles with many and varied voices, rather than a still-museum of well-known urns. Anyone who cares about poetry should read it. * Tom Paulin, Daily Telegraph *
brilliant * Notes and Queries *
'fascinating ... The breadth, the scope of this anthology would be difficult to surpass * The Scriblerian *
Here is a whole bustling world of street ballads, hymns, rhymes, polemics, squibs and jokes, as well as the classics Lonsdale's introduction authoritatively shows how the 18th century structured itself, suppressing some voices in favour of others. This is what a historical anthology ought to be like. * The Observer *
there is much to be gleaned from the 870 pages of this anthology ... The songs of Sheridan, Congreve, etc., come as gusts of fresh air in a drawing-room. * Irish Times *
the greatest pleasure in this superb anthology is given by the forgotten poets whom Professor Lonsdale has rescued from oblivion * Charles Osborne, Sunday Telegraph *

Emeritus Fellow of Balliol and former Professor of English at the University of Oxford, Roger Lonsdale is a celebrated authority on English literature of the eighteenth century. He is the author and editor of numerous books, including, most recently, Samuel Johnson's The Lives of the Poets (four volumes, OUpP, 2006).

GOR005784017
The New Oxford Book of Eighteenth-Century Verse: Reissue by Roger Lonsdale (Emeritus, Balliol College, Oxford)
Roger Lonsdale (Emeritus, Balliol College, Oxford)
Oxford Books of Prose & Verse
Used - Very Good
Paperback
Oxford University Press
2009-03-10
912
0199560722
9780199560721
N/A
Book picture is for illustrative purposes only, actual binding, cover or edition may vary.
This is a used book - there is no escaping the fact it has been read by someone else and it will show signs of wear and previous use. Overall we expect it to be in very good condition, but if you are not entirely satisfied please get in touch with us.