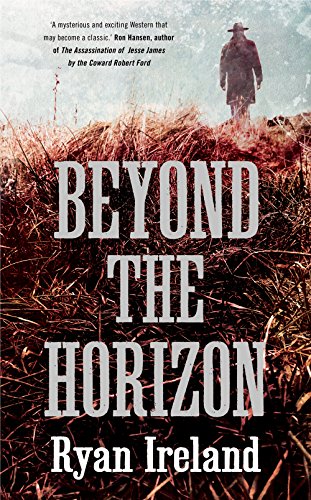 Beyond the Horizon
by Ryan Ireland

Beyond the Horizon Summary

Beyond the Horizon by Ryan Ireland

In frontier America, a man lives with a pregnant woman who is not his wife. When a stranger appears and advises him to register the baby as his own at a fabled military outpost, the man sets out on a lonely journey across an arid and hostile terrain. Soon after he departs, the stranger kills the woman before setting off in pursuit of the man.

As their parallel journeys unfold, we learn of the man's childhood working with his father on a ship rife with cannibalism and their subsequent life in a port town; we watch the stranger as he assumes many guises to shape-shift his way through history in pursuit of the man, a pawn in his brutal game of rewriting the founding myths of the American West.

Menacing, visceral and lyrical, Beyond the Horizon is an audacious debut: an astonishing sojourn into the darkest parts of Western lore that showcases a bold and enormous new talent in contemporary fiction.

Customer Reviews - Beyond the Horizon

Beyond the Horizon Reviews

'Ireland's intensely and brutally violent debut novel sweeps through period and place while exploring the role memory plays in the establishment of creation myths ... a barbaric vision of the West.' * Library Journal *
'Mythical, dangerous and deeply unsettling, you've not read a cowboy story like this before' * Shortlist *
'Ireland blends fanciful history with magic realism to create a critical allegory of the American expansionist experience ... Intellectual in theme, literary in execution: think Gabriel Garcia Marquez reimagining Little Big Man.' * Kirkus Reviews *
'With trenchant dialogue, affecting characters, and a page-turner of a story, Ryan Ireland has given readers a mysterious and exciting Western that may become a classic.' -- Ron Hansen, author of The Assassination of Jesse James by the Coward Robert Ford
'An unflinching, soul-searching story about the dangers of the American West. Through the use of lyrical and mythic prose, Ireland explores the darkest regions of desire, ambition, and survival.... Ireland's voice stands apart and he will surely be marked as a courageous and essential writer.' -- Ann Weisgarber, author of the award-winning The Personal History of Rachel DuPree and The Promise

Ryan Ireland was born and raised in Ohio. He lives in the village of Alpha with his wife and three children. He is a strong advocate for public libraries with work appearing in Public Library Quarterly and Voice of Youth Advocates. His writing has also been published in Fogdog Review, Seems, and Writing on the Edge. In 2009, he was recognized by Glimmer Train as one of the 25 Best New Writers. Beyond the Horizon is his first novel.

GOR007095521
Beyond the Horizon by Ryan Ireland
Ryan Ireland
Used - Very Good
Paperback
Oneworld Publications
2015-03-05
288
1780747748
9781780747743
N/A
Book picture is for illustrative purposes only, actual binding, cover or edition may vary.
This is a used book - there is no escaping the fact it has been read by someone else and it will show signs of wear and previous use. Overall we expect it to be in very good condition, but if you are not entirely satisfied please get in touch with us.