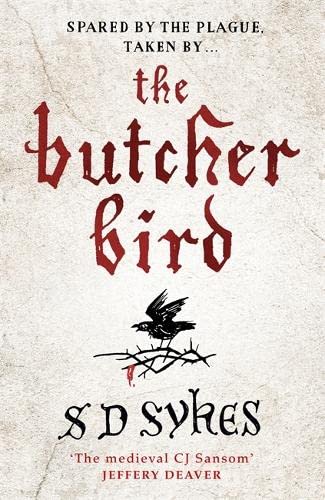 Oswald de Lacy is growing up fast in his new position as Lord of Somershill Manor. The Black Death changed many things, and just as it took away his father and elder brothers, leaving Oswald to be recalled from the monastery where he expected to spend his life, so it has taken many of his villagers and servants. However, there is still the same amount of work to be done in the farms and fields, and the few people left to do it think they should be paid more - something the King himself has forbidden.

Just as anger begins to spread, the story of the Butcher Bird takes flight. People claim to have witnessed a huge creature in the skies. A new-born baby is found impaled on a thorn bush. And then more children disappear.

Convinced the bird is just a superstitious rumour, Oswald must discover what is really happening. He can expect no help from his snobbish mother and his scheming sister Clemence, who is determined to protect her own child, but happy to neglect her step-daughters.

From the plague-ruined villages of Kent to the thief-infested streets of London and the luxurious bedchamber of a bewitching lady, Oswald's journey is full of danger, dark intrigue and shocking revelations.

Comparisons to the master of historical crime, CJ Sansom, are inevitable and, in this case, justified. * The Times *
The whodunnit aspect is neatly done, the family secrets and waspish relationships are intriguing, and humour and originality are abundant. * Daily Mail *
Trouble, and its attendant duties, confront the reluctant young lord on nearly every page of this eventful, engrossing, informative mystery set in mid-14th-century Kent. * Wall Street Journal *
Sykes establishes herself firmly as a major talent. * Publishers Weekly *
Praise for PLAGUE LAND -- :
The medieval CJ Sansom -- Jeffery Deaver
There's a nice, cliche-free sharpness to Sykes' writing . . . that suggests a medieval Raymond Chandler at work, and there are no phony celebrations of the peasantry or earth-mothers thrusting herbal concoctions down grateful throats. Plenty of action and interesting characters, without intervention of the libertarian modern conscience that so often wrecks the medieval historical novel. * Independent *
PLAGUE LAND is a fascinating historical crime novel about a world turned upside down, inhabited by a rich cast of characters. A terrific debut and a wonderful start to a brand-new series. -- Antonia Hodgson, author of THE DEVIL IN THE MARSHALSEA
Sykes's debut provides everything a reader would want in a historical mystery: a gripping plot, vivid language, living and breathing characters, and an immersive depiction of the past. * Publisher's Weekly *
Sykes has really reset the bar for medieval mysteries . . . every clue brings with it unexpected twists and turns. When you think you know who the killer is, you're slapped with yet another surprise. * Medievalists *

GOR010540708
The Butcher Bird: Oswald de Lacy Book 2 by S D Sykes
S D Sykes
Oswald de Lacy
Used - Like New
Hardback
Hodder & Stoughton
2015-10-22
352
1444785818
9781444785814
N/A
Book picture is for illustrative purposes only, actual binding, cover or edition may vary.
The book has been read, but looks new. The book cover has no visible wear, and the dust jacket is included if applicable. No missing or damaged pages, no tears, possible very minimal creasing, no underlining or highlighting of text, and no writing in the margins.