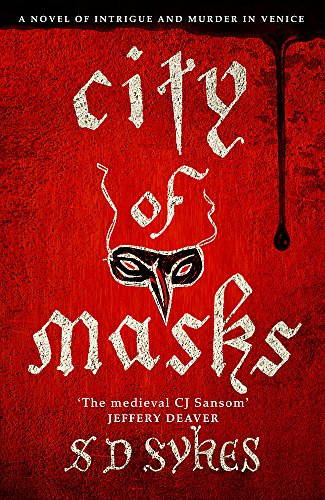 Book 3 in the gripping Oswald de Lacy series, which can be read as a standalone, from 'the medieval CJ Sansom' (Jeffery Deaver)

'It is Sykes' outstanding portrayal of the Venice of 1358 which makes such a fascinating setting for a mystery...[a] clever and original story' Crime Review

1358. Oswald de Lacy, Lord Somershill, is in Venice, awaiting a pilgrim galley to the Holy Land. While the city is under siege from the Hungarians, Oswald lodges with an English merchant, and soon comes under the dangerous spell of the decadent and dazzling island state that sits on the hinge of Europe, where East meets West.

Oswald is trying to flee the chilling shadow of something in his past, but when he finds a dead man on the night of the carnival, he is dragged into a murder investigation that takes him deep into the intrigues of this mysterious, paranoid city.

Coming up against the feared Signori di Notte, the secret police, Oswald learns that he is not the only one with something to hide. Everybody is watching somebody else, and nobody in Venice is what he or she seems. The masks are not just for the carnival.

Sykes is a master at combining historical setting with mystery * The Times *
Sykes's gamble in putting Oswald in unfamiliar terrain pays off, as she again blends a detailed immersion in the time period with a clever mystery plot line * Publishers Weekly *
An excellent addition to a thoroughly enjoyable series... Sykes has created a medieval detective story with a troubled protagonist which manages to stay true to its period and hints at even richer things to come - I thoroughly recommend it. * Historia *
A Venice whose ancient glories still survive today provides the background for an investigation whose solution is secondary to identifying the cause of Oswald's angst. * Kirkus *
We are plunged into Sykes' rich soup of Venetian intrigue; period detail; and increasingly intricate plotting, all with the deeply realized character of Lord Somershill fighting his own demons while investigating. A brilliant addition to the Somershill Manor Novels. * Booklist *
This third series outing offers further insights into Lord Somershill and the past that bedevils him, along with sophisticated plotting, intrigue, and immersion in a fascinating historical setting. * Library Journal *
Oswald's character, beautifully painted by Sykes, dominates this excellent historical thriller set against the waterways, palaces and dungeons of medieval Venice * Sunday Express *
Comparisons to the master of historical crime, CJ Sansom, are inevitable and, in this case, justified. * The Times *
The whodunnit aspect is neatly done, the family secrets and waspish relationships are intriguing, and humour and originality are abundant. * Daily Mail *
Sykes offers an unusual perspective on this historical period ... She also deals realistically with the troubles of the era's women. * New York Times *
Trouble, and its attendant duties, confront the reluctant young lord on nearly every page of this eventful, engrossing, informative mystery set in mid-14th-century Kent, England. * Wall Street Journal *
There's a nice, cliche-free sharpness to Sykes' writing . . . that suggests a medieval Raymond Chandler at work, and there are no phony celebrations of the peasantry or earth-mothers thrusting herbal concoctions down grateful throats. Plenty of action and interesting characters, without intervention of the libertarian modern conscience that so often wrecks the medieval historical novel. * Independent *
Sykes establishes herself firmly as a major talent. * Publishers Weekly *

GOR008422324
City of Masks: Oswald de Lacy Book 3 by S D Sykes
S D Sykes
Oswald de Lacy
Used - Very Good
Hardback
Hodder & Stoughton
2017-07-11
368
1444785842
9781444785845
N/A
Book picture is for illustrative purposes only, actual binding, cover or edition may vary.
This is a used book - there is no escaping the fact it has been read by someone else and it will show signs of wear and previous use. Overall we expect it to be in very good condition, but if you are not entirely satisfied please get in touch with us.