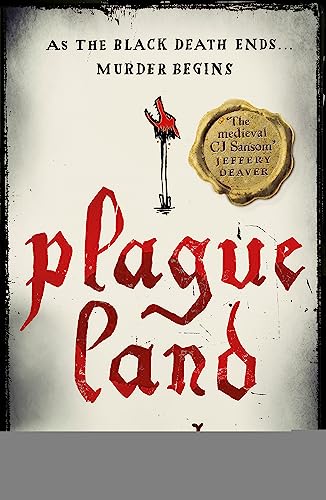 Used Price
$10.99
Free Shipping in the US
A thrillingly suspenseful crime novel set in medieval Kent in the aftermath of the Black Death.
Reviews:
Trustpilot
Very Good Good

Book 1 in the gripping Oswald de Lacy series, which can be read as a standalone, from 'the medieval CJ Sansom' (Jeffery Deaver)

Young Oswald de Lacey was never meant to be Lord of Somershill Manor, but when his father and older brothers die of the Plague, he must return home from the monastery and assume responsibility for an estate ravaged by pestilence.

Almost immediately Oswald is confronted with the vicious murder of a young woman, Alison Starvecrow. The village priest claims it is the work of demonic dog-headed men, a theory Oswald rejects as nonsense. But proving this - by finding the real killer - only leads Oswald deeper into a maze of political intrigue, family secrets and violent strife.

And then the body of another girl is found...

'Sykes has really reset the bar for medieval mysteries' Medievalists

The medieval CJ Sansom -- Jeffery Deaver
Sykes's damp, depopulated, miasmic Middle Ages is well evoked, making this an impressive debut with at least one sequel on the way. * The Herald, Scotland *
A novel full of suspense and intrigue that will have you gripped. * Best magazine *
There's a nice, cliche-free sharpness to Sykes' writing . . . that suggests a medieval Raymond Chandler at work, and there are no phony celebrations of the peasantry or earth-mothers thrusting herbal concoctions down grateful throats. Plenty of action and interesting characters, without intervention of the libertarian modern conscience that so often wrecks the medieval historical novel. * Independent *
PLAGUE LAND is a fascinating historical crime novel about a world turned upside down, inhabited by a rich cast of characters. A terrific debut and a wonderful start to a brand-new series. -- Antonia Hodgson, author of THE DEVIL IN THE MARSHALSEA
Sykes has really reset the bar for medieval mysteries . . . every clue brings with it unexpected twists and turns. When you think you know who the killer is, you're slapped with yet another surprise. * Medievalists *
Sykes's debut provides everything a reader would want in a historical mystery: a gripping plot, vivid language, living and breathing characters, and an immersive depiction of the past. * Publisher's Weekly *

GOR006741152
Plague Land: Oswald de Lacy Book 1 by S D Sykes
S D Sykes
Oswald de Lacy
Used - Very Good
Paperback
Hodder & Stoughton
2015-05-21
352
1444785788
9781444785784
N/A
Book picture is for illustrative purposes only, actual binding, cover or edition may vary.
This is a used book - there is no escaping the fact it has been read by someone else and it will show signs of wear and previous use. Overall we expect it to be in very good condition, but if you are not entirely satisfied please get in touch with us.