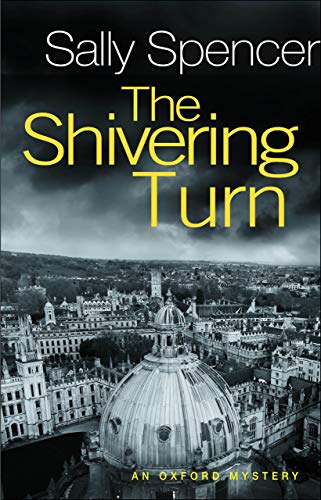 The Shivering Turn
by Sally Spencer

Used Price
$11.99
Free Shipping in the US
After the murder of a seventeen-year-old girl, an Oxford secret society is exposed in this series first
Reviews:
Trustpilot
Very Good

The Shivering Turn by Sally Spencer

'Spencer scores another top-notch hit with this new series' Booklist 'Spencer writes with verve and humor while delivering a satisfying mystery' Publishers Weekly Oxford, 1974. When seventeen-year-old Linda Corbet goes missing, the police dismiss her as an obvious runaway. Only Jennie Redhead, recently driven out of Oxford's police force, is prepared to dig deeper. She suspects that something truly dark and depraved drove Linda from her beloved home and doting parents. Jennie's investigation leads her to a secret Oxford society and to a clandestine world of violence, excess and desire, hidden behind the city's dreaming spires.

Spencer scores another top-notch hit with this new series, which features her usual skilful writing, clever plotting, and intriguing characters * * Booklist * *
Spencer writes with verve and humor while delivering a satisfying mystery plot and some insight into the workings of a great university * * Publishers Weekly * *
Even a routine procedural isn't quite so routine in Spencer's deft hands * * Kirkus Reviews * *

Sally Spencer is a pen name for a husband and wife writing team, called Alan and Lanna Rustage. Sally Spencer is the author of the Sam Blackstone mysteries and the DCI Monika Paniatowski mysteries. The Shivering Turn is the first book in the series. @SallySpencerebk | sallyspencer.com

GOR010247244
The Shivering Turn by Sally Spencer
Sally Spencer
Oxford mysteries
Used - Very Good
Paperback
Canongate Books Ltd
2019-11-07
304
1786894955
9781786894953
N/A
Book picture is for illustrative purposes only, actual binding, cover or edition may vary.
This is a used book - there is no escaping the fact it has been read by someone else and it will show signs of wear and previous use. Overall we expect it to be in very good condition, but if you are not entirely satisfied please get in touch with us.