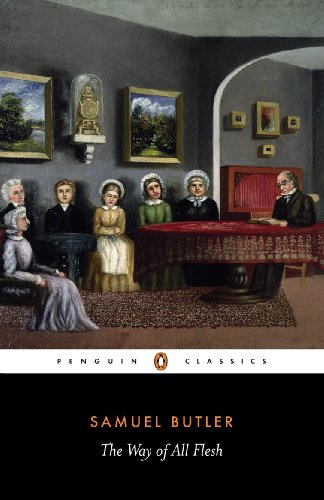 The Way of All Flesh
by Samuel Butler

In Stock
$11.39
Throws a subversive brick at the smug face of Victorian domesticity. Published in 1903, a year after Butler's death, this novel is a thinly disguised account of his own childhood and youth 'in the bosom of a Christian family'.
Very Good Good
Only 2 left

The Way of All Flesh Summary

The Way of All Flesh by Samuel Butler

'I am the enfant terrible of literature and science. If I cannot, and I know I cannot, get the literary and scientific big-wigs to give me a shilling, I can, and I know I can, heave bricks into the middle of them.' With The Way of All Flesh, Samuel Butler threw a subversive brick at the smug face of Victorian domesticity. Published in 1903, a year after Butler's death, the novel is a thinly disguised account of his own childhood and youth 'in the bosom of a Christian family'. With irony, wit and sometimes rancour, he savaged contemporary values and beliefs, turning inside-out the conventional novel of a family's life through several generations.

Samuel Butler (1835-1902) was the son of a clergyman. He was educated at Shrewsbury and St John's College Cambridge and, after a disagreement with his father about his choice of career, left England to become a sheep farmer in New Zealand, where he stayed until 1864. On his return to England, he took up residence in Clifford's Inn where he stayed until his death. He began to study painting and worked at it for ten years, exhibiting occasionally at the Royal Academy. In 1872 he anonymously published Erewhon which was based on the letters he wrote to his father from New Zealand. This was followed by The Fair Haven, an attack on the Resurrection, making clear the religious skepticism which had turned Butler against a career in the church.

In the years that followed, Butler wrote several works attacking contemporary scientific ideas, in particular Darwin's theory of natural selection. In 1881 he began to write books on art and travel, the first of these being Alps and Sanctuaries of Piedmont and the Canton Ticino. Around this time, he was also experimenting with musical composition and collaborated with Festing Jones on the oratorio entitled Narcissus. An interest in Homer led him to write lively translations of The Iliad and The Odyssey and he formed the theory that these two works were written by a woman. Butler's partly autobiographical work The Way of All Flesh was the result of many years' labor and appeared posthumously in 1903.

GOR001236604
The Way of All Flesh by Samuel Butler
Samuel Butler
Used - Very Good
Paperback
Penguin Books Ltd
1971-02-28
448
0140430121
9780140430127
N/A
Book picture is for illustrative purposes only, actual binding, cover or edition may vary.
This is a used book - there is no escaping the fact it has been read by someone else and it will show signs of wear and previous use. Overall we expect it to be in very good condition, but if you are not entirely satisfied please get in touch with us.