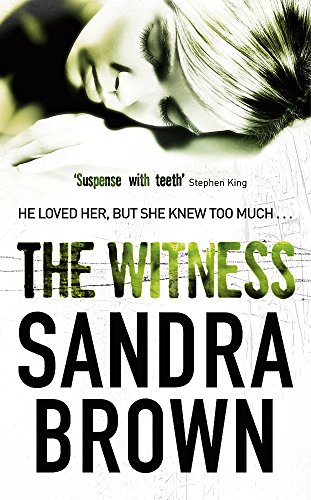 The Witness
by Sandra Brown

The Witness: The gripping thriller from #1 New York Times bestseller by Sandra Brown

On a rain-slick road, a car crash leaves only three survivors: an infant, a man clinging to his life, and Kendall Deaton. But she doesn't dare reveal any of their true identities to the authorities. Instead, she plans her escape. Her perilous flight begins.

The best public defender in Prosper, South Carolina, Kendall had stumbled upon the town's chilling secret, making her marriage into a powerful family a living hell. Now Kendall, a terrified mother trying to protect her child and a reluctant witness to evil, is surrounded by forces that will stop at nothing to protect what is 'theirs'.

GOR001107653
The Witness: The gripping thriller from #1 New York Times bestseller by Sandra Brown
Sandra Brown
Used - Very Good
Paperback
Hodder & Stoughton General Division
2008-09-18
448
0340961805
9780340961803
N/A
Book picture is for illustrative purposes only, actual binding, cover or edition may vary.
This is a used book - there is no escaping the fact it has been read by someone else and it will show signs of wear and previous use. Overall we expect it to be in very good condition, but if you are not entirely satisfied please get in touch with us.