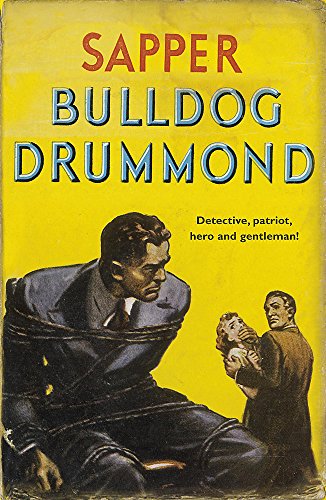 In Stock
$10.39
The world famous detective Bulldog Drummond in his first adventure that took the world by storm, packaged in its original jacket
Very Good
6 in stock

Bulldog Drummond. Hero, patriot, sportsman and quintessential English gentleman. An army officer in the First World War, he knows how to fight hard and play fair and there is not much that can shake him. Finding peace unbearably tedious he puts an ad in the newspaper offering his services to any client who can offer adventure.

An attractive young woman called Phyllis contacts him fearing for her father who seems to be under the power of blackmailers. Without hesitation Drummond accepts the commission and starts to investigate and uncovers a plot that threatens not just Phyllis and her family but the country itself.

'Sapper's new BULLDOG DRUMMOND shows all the old breathless invention as active as ever . . . a rattling story' * Punch *
'You will not have a dull moment while you read this book' * Daily News *
'Sapper is so excellent a spinner of yarns, and describes with such gusto Homeric fights and contests of brawn and brain, that it is an ungracious task to criticise anything he writes . . . brilliantly told' * Pall Mall Gazette *
'Hugh . . . is a delightful character. BULLDOG DRUMMOND may be recommended as an absolutely first-rate story of a kind in which success is by no means common.' * Westminster Gazette *
'A really magnificent yarn' * Queen *
'BULLDOG DRUMMOND is a splendidly exciting tale' * The Times *

Sapper was born Herman McNeile in 1888 in Bodmin, Cornwall. He fought with the Royal Engineers in the First World War and was awarded the Military Cross for bravery. His war stories were published in the Daily Mail and were immensely popular - a collection of them selling 200,000 copies in a year. The first Bulldog Drummond adventure was published in 1920 and was an instant hit. He went on to write 9 more in the series, which spawned 24 films, in addition to radio adaptations, and inspired more. He died in 1937.

GOR001233100
Bulldog Drummond by Sapper
Sapper
Used - Very Good
Paperback
Hodder & Stoughton General Division
2007-05-31
256
0340922885
9780340922880
N/A
Book picture is for illustrative purposes only, actual binding, cover or edition may vary.
This is a used book - there is no escaping the fact it has been read by someone else and it will show signs of wear and previous use. Overall we expect it to be in very good condition, but if you are not entirely satisfied please get in touch with us.