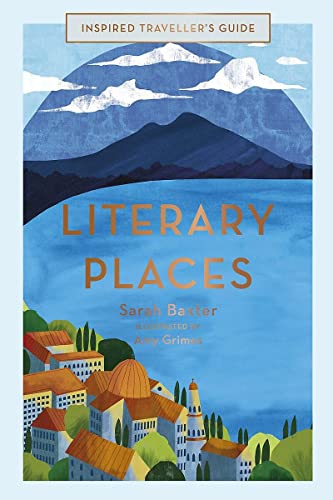 In Stock
$15.99
Bringing together comprehensively researched text and stunning hand-drawn illustrations especially crafted for this book, Inspired Traveller's Guide: Literary Places will take readers on an enlightening journey through the key locations of literature's best and brightest authors, movements and moments.
Like New Very Good
Only 1 left

Inspired Traveller's Guides: Literary Places takes you on an enlightening journey through the key locations of literature's best and brightest authors, movements and moments - brought to life through comprehensively researched text and stunning hand-drawn artwork.

Travel journalist Sarah Baxter provides comprehensive and atmospheric outlines of the history and culture of 25 literary places around the globe, as well as how they intersect with the lives of the authors and the works that make them significant. Full-page colour illustrations instantly transport you to each location. You'll find that these places are not just backdrops to the tales told, but characters in their own right.

Travel to the sun-scorched plains of Don Quixote's La Mancha, roam the wild Yorkshire moors with Cathy and Heathcliff or view Central Park through the eyes of J.D. Salinger's antihero. Explore the lush and languid backwaters of Arundhati Roy's Kerala, the imposing precipice of Joan Lindsay's Hanging Rock and the labyrinthine streets and sewers of Victor Hugo's Paris.

Delve into this book to discover some of the world's most fascinating literary places and the novels that celebrate them.

Each book in the Inspired Traveller's Guides series offers readers a fascinating, informative and charmingly illustrated guide to must-visit destinations round the globe. Also from this series, explore intriguing: Spiritual Places, Hidden Places and Mystical Places.

Sarah Baxter grew up in Norfolk, England and now lives in Bath. Her passion for travel and the great outdoors saw her traverse Asia, Australia, New Zealand and the United States before settling into a writing career. She was Associate Editor of Wanderlust magazine, the bible for independent-minded travellers, for more than ten years and has also written extensively on travel for a diverse range of other publications, including the Guardian, the Telegraph and the Independent newspapers. Sarah has also contributed to more than a dozen Lonely Planet guidebooks.

Amy Grimes is an illustrator based in London. Drawing inspiration from nature and the natural world, Amy's work often features bright and bold illustrated motifs, floral icons and leafy landscapes. As well as working on commissioned illustrations, Amy also sells prints, textiles and stationery under the brand of Hello Grimes.

2. Dublin, Ireland - James Joyce's Ulysses. Discover Davy Byrne's pub, the iconic location where you can still drink in the spirit of Leopold Bloom.

3. Florence, Italy - EM Forster's A Room with a View. Exploring the city that sparked a young English woman's awakening.

4. Naples, Italy - Elsa Ferrante's My Brilliant Friend. A modern classic of two girls building a life on the outskirts of Naples.

7. St Petersburg, Russia - Fyodor Dostoyevsky's Crime and Punishment. Follow in the footsteps of Raskolnikov roaming the back streets of the city.

10. Davos, Switzerland - Thomas Mann's The Magic Mountain. One of the most influential works of 20th-century German literature.

16. Kerala, India - Arundhati Roy's The God of Small Things. The Booker-winning novel follows the lives of twins, and captures many facets of Kerala life.

18. Kabul, Afghanistan - Khaled Hosseini's The Kite Runner. The setting for this evocative tale of two boys set against the fall of Afghanistan's monarchy and the rise of the Taliban.

23. Monroeville, Alabama, USA - Harper Lee's To Kill A Mockingbird. Lee's hometown, the inspiration for the setting of this classic novel.

24. Cartagena, Colombia - Gabriel Garcia Marquez's Love in the Time of Cholera. Exploring locations used in the novel by the iconic Colombian author.

25. Chile - Isabel Allende's The House of Spirits. Evocative novel set in unnamed place but believed to be Santiago under Pinochet.

GOR010119488
Literary Places by Sarah Baxter
Sarah Baxter
Inspired Traveller's Guides
Used - Like New
Hardback
White Lion Publishing
2019-03-04
144
1781318107
9781781318102
N/A
Book picture is for illustrative purposes only, actual binding, cover or edition may vary.
The book has been read, but looks new. The book cover has no visible wear, and the dust jacket is included if applicable. No missing or damaged pages, no tears, possible very minimal creasing, no underlining or highlighting of text, and no writing in the margins.