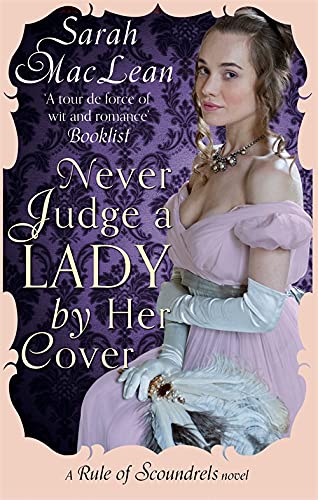 Never Judge a Lady By Her Cover
by Sarah MacLean

Used Price
$9.39
Free Shipping in the US
Fourth in a sensational new series by one of the most exciting voices in historical romance
Reviews:
Trustpilot
Like New Very Good

Never Judge a Lady By Her Cover Summary

Never Judge a Lady By Her Cover: Number 4 in series by Sarah MacLean

RITA Award winning author, Sarah MacLean, reveals the identity of The Fallen Angel's final scoundrel in the spectacular conclusion to her Rules of Scoundrels series . . .

By day, she is Lady Georgiana, sister to a duke, ruined before her first season in the worst kind of scandal. But the truth is far more shocking-in London's darkest corners, she is Chase, the mysterious, unknown founder of the city's most legendary gaming hell. For years, her double identity has gone undiscovered . . . until now.

Brilliant, driven, handsome-as-sin Duncan West is intrigued by this beautiful woman who is somehow connected to a world of darkness and sin. He knows she is more than she seems and he vows to uncover all of Georgiana's secrets, laying bare her past, threatening her present, and risking all she holds dear . . . including her heart.

Rules of Scoundrels series:
A Rogue by Any Other Name
One Good Earl Deserves a Lover
No Good Duke Goes Unpunished
Never Judge a Lady By Her Cover

Customer Reviews - Never Judge a Lady By Her Cover

Never Judge a Lady By Her Cover Reviews

MacLean wraps up her popular Rules of Scoundrels series with the clever plotting, exquisite writing and lush sensuality she is known for. A worthy conclusion to an extraordinary series. * Kirkus Reviews (starred review) *

Sarah MacLean grew up in Rhode Island, obsessed with historical romance and bemoaning the fact that she was born far too late for her own season. Her love of all things historical helped to earn her degrees from Smith College and Harvard University before she finally set pen to paper and wrote her first book. Sarah lives with her family and a ridiculously large collection of romance novels.

GOR008328229
Never Judge a Lady By Her Cover: Number 4 in series by Sarah MacLean
Sarah MacLean
Rules of Scoundrels
Used - Like New
Paperback
Little, Brown Book Group
2014-11-25
384
0349400601
9780349400600
N/A
Book picture is for illustrative purposes only, actual binding, cover or edition may vary.
The book has been read, but looks new. The book cover has no visible wear, and the dust jacket is included if applicable. No missing or damaged pages, no tears, possible very minimal creasing, no underlining or highlighting of text, and no writing in the margins.