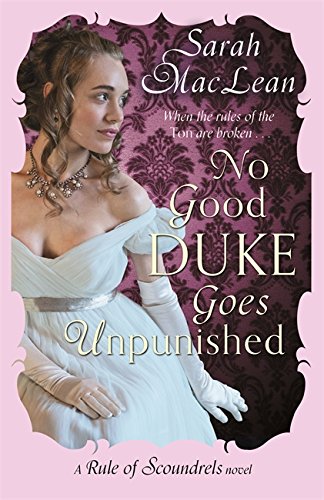 He is the Killer Duke, accused of murdering Mara Lowe on the eve of her wedding. With no memory of that fateful night, Temple has reigned over the darkest of London's corners for twelve years, wealthy and powerful but beyond redemption. Until one night, Mara resurfaces, offering the one thing he's dreamed of... absolution.

Mara planned never to return to the world from which she'd run but when her brother falls deep into debt at Temple's exclusive casino, she has no choice but to offer Temple a trade that ends in her returning to society and proving to the world what only she knows... that he is no killer.

It's a fine trade, until Temple realises that the lady - and her past - are more than they seem. It will take every bit of his strength to resist the pull of this mysterious, maddening woman who seems willing to risk everything... even true love.

*Winner of the RITA Award for Best Historical Romance in 2014*

Rules of Scoundrels series:
A Rogue by Any Other Name
One Good Earl Deserves a Lover
No Good Duke Goes Unpunished
Never Judge a Lady By Her Cover

MacLean once again creates compelling and complex characters and sets them on a path toward love and reconciliation that begins with seemingly impossible odds and ends with exquisite fulfillment. Beguiling and emotionally lush * Kirkus Reviews (starred review) *
MacLean seamlessly moves from the first novel in her Rules of Scoundrels series to the second. The same great chemistry, intelligence and sparkling humor shine, and the added sexual tension provided by lessons in temptation provides readers with a delectable read. Pure, unadulterated MacLean! * RT Book Reviews *

Sarah MacLean grew up in Rhode Island, obsessed with historical romance and bemoaning the fact that she was born far too late for her own season. Her love of all things historical helped to earn her degrees from Smith College and Harvard University before she finally set pen to paper and wrote her first book. Sarah now lives in New York City with her husband, their dog, and a ridiculously large collection of romance novels.

GOR005273860
No Good Duke Goes Unpunished: Number 3 in series by Sarah MacLean
Sarah MacLean
Rules of Scoundrels
Used - Very Good
Paperback
Little, Brown Book Group
2013-11-26
400
034940061X
9780349400617
Short-listed for RITA award for Romance Fiction 2014 (UK)
Book picture is for illustrative purposes only, actual binding, cover or edition may vary.
This is a used book - there is no escaping the fact it has been read by someone else and it will show signs of wear and previous use. Overall we expect it to be in very good condition, but if you are not entirely satisfied please get in touch with us.