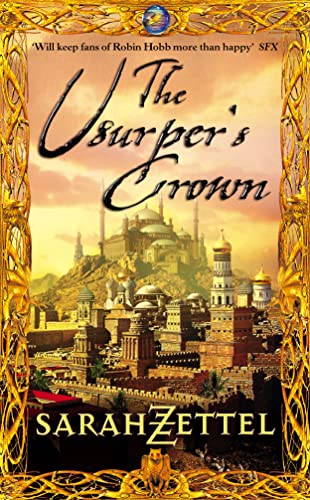 The Usurper's Crown
by Sarah Zettel

The second volume in a stunning fantasy trilogy set partly on the shores of Lake Superior in the 19th century.

The Usurper's Crown: Book Two of the Isavalta Trilogy by Sarah Zettel

The second volume in a stunning fantasy trilogy set partly on the shores of Lake Superior in the 19th century.

When Ingrid Loftfield follows her sister out of the house in order to discover the reason for her nighttime excursions, she has no idea that this short walk to the beach will lead her to another world entirely. As the daughter of a fisherman on the shores of Lake Superior, her life has so far been unremarkable - the most difficult problem she has faced is whether or not to marry the dependable but unexciting Everett Lederle.

But when a stranger releases her sister, Grace, from an enchantment by a dead sailor, Ingrid is initiated into a world of magic and intrigue she never could have imagined. For the stranger, Avanasy, is a native of Isavalta, a world which can only be reached by crossing the land of Death and Spirit. He has been exiled by his ruler, and erstwhile student, the young Empress Medeoan. But Avanasy remains loyal to his Empress, and only he is aware of the grave threat she faces from within her own court. If she needs his assistance he will return to her side without a moment's hesitation - and Ingrid will go with him.

`A tale that spins wonder with vivid and touching complexity - beautiful as a prism. Sarah Zettel has delivered a dazzling realm of amazement.' JANNY WURTS

Praise for A Sorcerer's Treason:

Zettel's first fantasy novel is a triumph of story-telling...All the characters are powerfully drawn, especially Bridget, a strong and attractive heroine...A Sorcerer's Treason is a magnificent fantasy novel, showcasing just how good this genre can be. Rich, compelling and exciting, this could be the best fantasy debut in years' Amazon

`A fresh and surprisingly exciting fantasy thriller...Zettel's engaging writing style conjures up a gripping plot and some effective, three-dimensional characterisation. Even the magic system is well-thought out and inventive...this engaging and vivid slice of escapist fantasy will keep fans of Robin Hobb more than happy' SFX

Sarah Zettel was born in California in 1966. Since then, she's lived in ten cities, four states and two countries. She has written four science fiction novels and many short stories in the sf, fantasy and horror genres. She currently lives in Michigan with her husband and their son.

GOR001221162
The Usurper's Crown: Book Two of the Isavalta Trilogy by Sarah Zettel
Sarah Zettel
Used - Very Good
Paperback
HarperCollins Publishers
2004-01-05
640
0007114028
9780007114023
N/A
Book picture is for illustrative purposes only, actual binding, cover or edition may vary.
This is a used book - there is no escaping the fact it has been read by someone else and it will show signs of wear and previous use. Overall we expect it to be in very good condition, but if you are not entirely satisfied please get in touch with us.