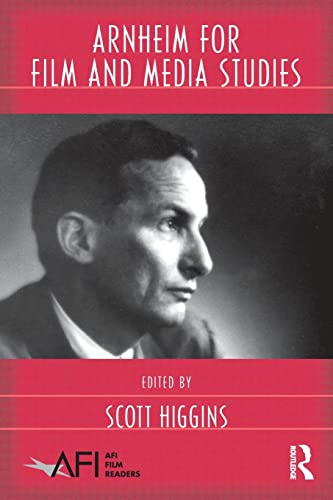 Used Price
$260.99
Free Shipping in the US
Revisits Rudolf Arnheim's legacy for film and media studies. This title brings Arnheim's later work on the visual arts to bear on film and media, while also reassessing the implications of his film theory to help refine our grasp of his landmark work Film as Art, among his other texts.
Reviews:
Trustpilot
Good

Rudolf Arnheim (1904-2007) was a pioneering figure in film studies, best known for his landmark book on silent cinema Film as Art. He ultimately became more famous as a scholar in the fields of art and art history, largely abandoning his theoretical work on cinema. However, his later aesthetic theories on form, perception and emotion should play an important role in contemporary film and media studies.

In this enlightening new volume in the AFI Film Readers series, an international group of leading scholars revisits Arnheim's legacy for film and media studies. In fourteen essays, the contributors bring Arnheim's later work on the visual arts to bear on film and media, while also reassessing the implications of his film theory to help refine our grasp of Film as Art and related texts. The contributors discuss a broad range topics including Arnheim's film writings in relation to modernism, his antipathy to sound as well as color in film, the formation of his early ideas on film against the social and political backdrop of the day, the wider uses of his methodology, and the implications of his work for digital media.

This is essential reading for any film and media student or scholar seeking to understand the meaning and contemporary impact of Arnheim's foundational work in film theory and aesthetics.

"...this volume is a bracing and engaging read, swiftly moving from one film to the next, and one aspect of the cinema to another, to give a comprehensive overview of Arnheim's continuing impact on film criticism." - CHOICE, April 2011

8. Art, Accident, and the Interpretation of the Modern World, Patrick Keating

14. Arnheim on the Ontology of the Photographic Image, Vincent Bohlinger

GOR010804174
Arnheim for Film and Media Studies by Scott Higgins (Wesleyan University, USA)
Scott Higgins (Wesleyan University, USA)
AFI Film Readers
Used - Good
Paperback
Taylor & Francis Ltd
2010-10-21
288
0415801087
9780415801089
N/A
Book picture is for illustrative purposes only, actual binding, cover or edition may vary.
The book has been read but remains in clean condition. All pages are intact and the cover is intact. Some minor wear to the spine.