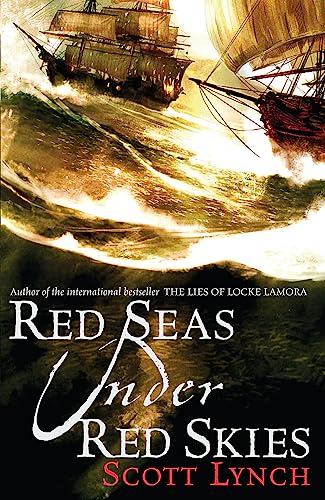 In Stock
$133.99
Locke Lamora takes to the seas in the sequel to the sensation THE LIES OF LOCKE LAMORA
Like New Very Good Good
Only 1 left

Escaping from the attentions of the Bondsmagi Locke Lamora, the estwhile Thorn of Camorr and Jean Tannen have fled their home city. Taking ship they arrive in the city state of Tal Varrar where they are soon planning their most spectacular heist yet; they will take the luxurious gaming house, The Sinspire, for all of its countless riches.

No-one has ever taken even a single coin from the Sinspire that wasn't won on the tables or in the other games of chance on offer there.

But, as ever, the path of true crime rarely runs smooth and Locke and Jean soon find themselves co-opted into an attempt to bring the pirate fleet of the notorious Zamira Drakasha to justice. Fine work for thieves who don't know one end of galley from another.

And all the while the Bondsmagi are plotting their very necessary revenge against the one man who believes e has humiliated them and lived; Locke Lamora.

Scott Lynch was born in 1978 in St. Paul, Minnesota, and current lives in Wisconsin. In addition to being a freelance writer for various role playing game companies he has done all the usual jobs writers put in their bios: dishwasher, waiter, web designer, marketing writer, office manager and short-order cook. His first novel, The Lies of Locke Lamora, was an international success and he now writes full-time.

GOR005379347
Red Seas Under Red Skies: The Gentleman Bastard Sequence, Book Two by Scott Lynch
Scott Lynch
Gentleman Bastard
Used - Like New
Paperback
Orion Publishing Co
2007-01-01
640
0575079673
9780575079670
N/A
Book picture is for illustrative purposes only, actual binding, cover or edition may vary.
The book has been read, but looks new. The book cover has no visible wear, and the dust jacket is included if applicable. No missing or damaged pages, no tears, possible very minimal creasing, no underlining or highlighting of text, and no writing in the margins.