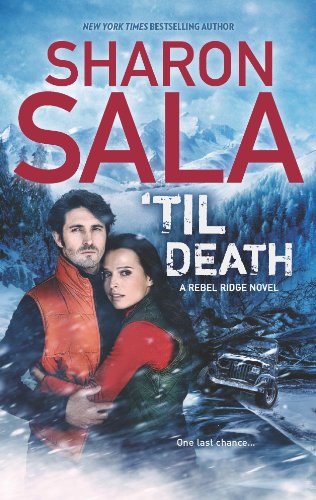 'til Death
by Sharon Sala

Used Price
$13,69
Free Shipping in the US
"Harlequin MIRA romantic suspense"--Spine.
Like New

'til Death by Sharon Sala

He left in handcuffs. Now it's time to set himself free.

Nearly twenty years after he was wrongly convicted of setting the fire that killed his father, Lincoln Fox returns to Rebel Ridge, Kentucky. There, deep in the Appalachians, the truth of that terrible night lies buried--and he's sworn to uncover it.

His plans take an unexpected turn when, in the midst of a blizzard, he rescues Meg Walker from her wrecked car. Suddenly Linc discovers another reason to clear his name. Meg, his high school sweetheart, had always believed in his innocence, and if he wants a future with her, he has to show the world proof that she was right.

As the community chooses sides, those who once let a teenage boy take the fall for their crime are forced to raise the stakes. They kidnap Meg, leaving her to the mercy of the mountain. And a second rescue may be more than even Linc can manage....

"Sharon Sala is not only a top romance novelist, she is an inspiration for people everywhere who wish to live their dreams."
-John St. Augustine, host, Power!Talk Radio WDBC-AM, Michigan

"Veteran romance writer Sala lives up to her reputation with this well-crafted thriller."
-Publishers Weekly on Remember Me

"Perfect entertainment for those looking for a suspense novel with emotional intensity."
-Publishers Weekly on Out of the Dark

GOR010631248
'til Death by Sharon Sala
Sharon Sala
Rebel Ridge Novels
Used - Like New
Paperback
Mira Books
2013-03-26
381
0778314278
9780778314271
N/A
Book picture is for illustrative purposes only, actual binding, cover or edition may vary.
The book has been read, but looks new. The book cover has no visible wear, and the dust jacket is included if applicable. No missing or damaged pages, no tears, possible very minimal creasing, no underlining or highlighting of text, and no writing in the margins.