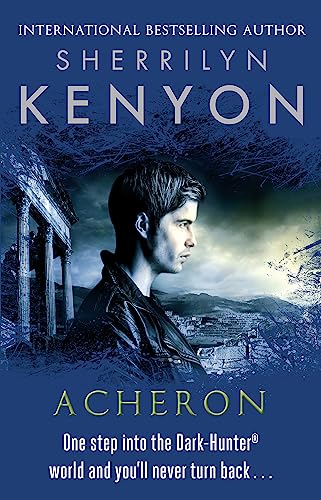 Used Price
$10.99
Free Shipping in the US
This is the most awaited book in the Dark-Hunter world to date - the history of Acheron. His past as a human, his birth as a god, and his role as the Dark-Hunter leader. These are the two books of his life released as a single volume.
Reviews:
Trustpilot
Very Good Good

Eleven thousand years ago a god was born. Cursed into the body of a human, Acheron endured a lifetime of hatred. His human death unleashed an unspeakable horror that almost destroyed the earth. Brought back against his will, he became the sole defender of mankind. Only it was never that simple...

For centuries, he has fought for our survival and hidden a past he never wants revealed.
Now his survival, and ours, hinges on the very woman who threatens him. Old enemies are reawakening and uniting to kill them both.

Sarcasm, banter and fast paced action mix with heart wrenching romance...make a hugely fun and hugely readable story...Acheron been a long time coming but is definitely worth the wait. Seriously, what's not to like? Sherrilyn Kenyon is writing on top form here, delivering all the things that established Dark-Hunter fans have come to crave - such as fast paced thrills, hot romance and witty banter * lovevampires.com *

Writing as Sherrilyn Kenyon and Kinley MacGregor, she is the New York Times bestselling and award-winning author of several series: the Dark-Hunters; the Lords of Avalon; and the League. She lives with her husband and three sons in Nashville, Tennessee.

GOR005234586
Acheron by Sherrilyn Kenyon
Sherrilyn Kenyon
The Dark-Hunter World
Used - Very Good
Paperback
Little, Brown Book Group
2012-07-31
768
0749956569
9780749956561
N/A
Book picture is for illustrative purposes only, actual binding, cover or edition may vary.
This is a used book - there is no escaping the fact it has been read by someone else and it will show signs of wear and previous use. Overall we expect it to be in very good condition, but if you are not entirely satisfied please get in touch with us.