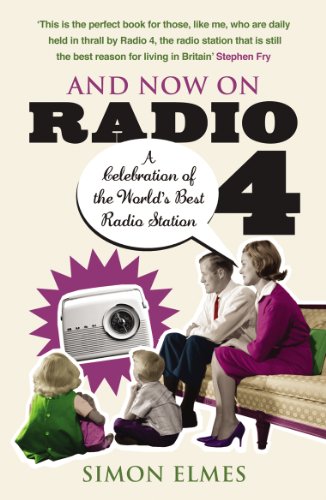 And Now on Radio 4
by Simon Elmes

In Stock
$8.99
And Now on Radio 4 offers an enthusiast's guide to the shows that have made Radio 4 what it is, and also explores some of the wonderful corners of the network's history that are long forgotten by all but a few.
Very Good
7 in stock

And Now on Radio 4 Summary

And Now on Radio 4: A Celebration of the World's Best Radio Station by Simon Elmes

And Now on Radio 4 offers an enthusiast's guide to the shows that have made Radio 4 what it is, and also explores some of the wonderful corners of the network's history that are long forgotten by all but a few. Who, for instance, now recalls Ronnie Barker's starring role on Radio 4 in a sophisticated cabaret-cum-sketch-show called Lines from My Grandfather's Forehead? What about Spike Milligan's intimate, soul-bearing account of his upbringing in colonial India, Plain Tales from the Raj? And who now remembers that Start the Week was once hosted by Russell Harty, a bit of programming compared by one insider to letting Graham Norton run Newsnight. In order to reflect the way devotees listen to Radio 4, the book is organised not on simple chronological lines but in the form of a typical day. Chapter by chapter, the day evolves, from Farming Today, through the daily feast that is Today, through the morning menu of conversation, Woman's Hour, documentary and comedy. Lunchtime brings The World at One. The early evening, of course, yields The Archers. And finally there's Book at Bedtime and Sailing By. An addictive mix of history, biography, anecdote and occasional useless fact, this is the perfect book for Radio 4 aficionados.

And Now on Radio 4 Reviews

"... congenial - chatty, a little bit personal ... it's hard to imagine what more a Radio 4 fan could want" * The Independent *
"Written as a day in the life, with the stories behind each show, it deals with the laugh-out-loud hilarious and the somewhat less thrilling ... as Elmes deftly and enthusiastically describes, achieving this depth of programming and balance was not easy ..." * Word *
"... strong on gossip and nostalgia ... there are delightful stories in the book" * The Daily Mail *
"... cosy, celebratory ... It is a happy book, celebrating Radio 4 as above all a friend and companion" * The Times *
"Insiderish" * The Guardian *

Simon Elmes is Creative Director of the BBC's Radio Documentary Unit, where he oversees a wide range of programmes. He was Executive Producer of the long-running magazine Word of Mouth, from its inception until 2004. In 1996 it was awarded one of the world's premier broadcasting prizes, the Premio Ondas. He produced the award-winning The Routes of English, a 26-part series on the history of the English language, and has written four books to accompany the series. He also produced the 2005 radio and TV project Voices.

GOR001223417
And Now on Radio 4: A Celebration of the World's Best Radio Station by Simon Elmes
Simon Elmes
Used - Very Good
Paperback
Cornerstone
2008-07-03
352
0099505371
9780099505372
N/A
Book picture is for illustrative purposes only, actual binding, cover or edition may vary.
This is a used book - there is no escaping the fact it has been read by someone else and it will show signs of wear and previous use. Overall we expect it to be in very good condition, but if you are not entirely satisfied please get in touch with us.