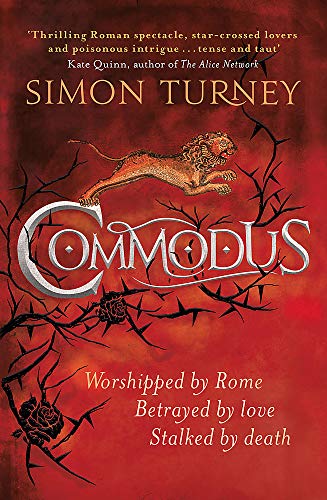 Used Price
$9.99
Free Shipping in the US
From the author of Caligula ('an engrossing new spin on a well-known tale' - The Times) comes a new standalone novel in the Damned Emperors series: Commodus.
Reviews:
Trustpilot
Like New Very Good

Worshipped by Rome. Betrayed by love. Stalked by death.

Rome is enjoying a period of stability and prosperity. The Empire's borders are growing, and there are two sons in the imperial succession for the first time in Rome's history. But all is not as it appears. Cracks are beginning to show. Two decades of war have taken their toll, and there are whispers of a sickness in the East. The Empire stands on the brink of true disaster, an age of gold giving way to one of iron and rust, a time of reason and strength sliding into hunger and pain.

The decline may yet be halted, though. One man tries to hold the fracturing empire together. To Rome, he is their emperor, their Hercules, their Commodus.

But Commodus is breaking up himself, and when the darkness grips, only one woman can hold him together. To Rome she was nothing. The plaything of the emperor. To Commodus, she was everything. She was Marcia.

Astonishing . . . A fascinating, detailed and dramatic story of one of Rome's most notorious emperors * SUNDAY EXPRESS *
A nuanced portrait of an intriguing emperor * THE TIMES *
Simon Turney's Commodus combines thrilling Roman spectacle, star-crossed young lovers, and poisonous palace intrigue into a compulsively readable drama. Scrappy young freedwoman Marcia grows up in the shadows of the palace, becoming friend and confidante to the golden, haunted Imperial heir Commodus, but even Marcia's love cannot keep the prince's ghosts at bay once he becomes Emperor of Rome. A tense, taut, thrilling character study of one of Rome's most maligned rulers, transformed here into tragic hero -- Kate Quinn, author of THE ALICE NETWORK
Commodus, son of Marcus Aurelius: mad, bad and dangerous to stand too close to according to history. Simon Turney, however, does here what he did in Caligula - puts some humanity back in the beast of Rome. Warm and well-written -- Robert Low, author of the Oathsworn series
Turney masterfully gives readers a new and illuminating look at Emperor Commodus, but also introduces us to the clever freedwoman who should have been his empress. Seeing imperial Rome through Marcia's eyes is a delight not to be missed, and Turney is at the top of his game! * STEPHANIE DRAY *

A born and bred Yorkshireman with a love of country, history and architecture, Simon spends most of his rare free time travelling around ancient sites, writing, researching the ancient world and reading voraciously.

Following an arcane and eclectic career path that wound through everything from sheep to Microsoft networks and from paint to car sales, Simon wrote Marius' Mules. Now, with in excess of twenty novels under his belt, Simon writes full time. He lives with his wife and children and a menagerie of animals in rural North Yorkshire.

GOR010481207
Commodus: The Damned Emperors Book 2 by Simon Turney
Simon Turney
The Damned Emperors
Used - Like New
Paperback
Orion Publishing Co
2020-03-05
496
1474607381
9781474607384
N/A
Book picture is for illustrative purposes only, actual binding, cover or edition may vary.
The book has been read, but looks new. The book cover has no visible wear, and the dust jacket is included if applicable. No missing or damaged pages, no tears, possible very minimal creasing, no underlining or highlighting of text, and no writing in the margins.