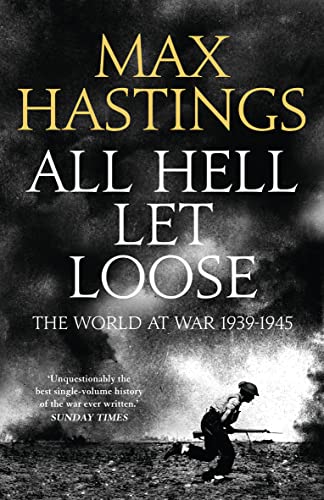 A magisterial history of the greatest and most terrible event in history, from one of the finest historians of the Second World War. A book which shows the impact of war upon hundreds of millions of people around the world- soldiers, sailors and airmen; housewives, farm workers and children.

A magisterial history of the greatest and most terrible event in history, from one of the finest historians of the Second World War. A book which shows the impact of war upon hundreds of millions of people around the world- soldiers, sailors and airmen; housewives, farm workers and children.

Reflecting Max Hastings's thirty-five years of research on World War II, All Hell Let Loose describes the course of events, but focuses chiefly upon human experience, which varied immensely from campaign to campaign, continent to continent.

The author emphasises the Russian front, where more than 90% of all German soldiers who perished met their fate. He argues that, while Hitler's army often fought its battles brilliantly well, the Nazis conducted their war effort with `stunning incompetence'. He suggests that the Royal Navy and US Navy were their countries' outstanding fighting services, while the industrial contribution of the United States was much more important to allied victory than that of the US Army.

The book ranges across a vast canvas, from the agony of Poland amid the September 1939 Nazi invasion, to the 1943 Bengal famine, in which at least a million people died under British rule- and British neglect. Among many vignettes, there are the RAF's legendary raid on the Ruhr dams, the horrors of Arctic convoys, desert tank combat, jungle clashes. Some of Hastings's insights and judgements will surprise students of the conflict, while there are vivid descriptions of the tragedies and triumphs of a host of ordinary people, in uniform and out of it.

`The cliche is profoundly true', he says. `The world between 1939 and 1945 saw some human beings plumb the depths of baseness, while others scaled the heights of courage and nobility'. This is `everyman's story', an attempt to answer the question: `What was the Second World War like ?', and also an overview of the big picture. Max Hastings employs the technique which has made many of his previous books best-sellers, combining top-down analysis and bottom-up testimony to explore the meaning of this vast conflict both for its participants and for posterity.

"This is the book he was born to write: a work of staggering scope and erudition, narrated with supreme fluency and insight, it is unquestionably the best single-volume history of the war ever written..... he writes with a wonderfully clear, unsentimental eye......and has a terrific grasp of the grand sweep and military strategy......But what makes his book a compelling read are the human stories......at the end of this gruesome, chilling but quite magnificent book, you never doubt that the war was worth fighting". Sunday Times

"No other general history of the war amalgamates so successfully the gut-wrenching personal details and the essential strategic arguments. Melding the worm's eye view and the big picture is a difficult trick to pull of - but Hastings has triumphed". The Times

"majestic...it is impossible to emerge without a sense of the sheer scale of human tragedy.....To gather all these anecdotes together is a task in itself, but to assemble them in a way that makes sense is something entirely different....Hastings shapes all these stories, almost miraculously, into a single coherent narrative". Daily Telegraph

"In this massive work, the crowning volume of the 10 impressive books he has written about the Second World War, Sir Max Hastings spares us nothing in portraying the sheer bloody savagery of the worst war that the world has yet seen....this magnificent book....is hypnotically readable from the first page to the last". Sunday Telegraph

"a fast-moving, highly readable survey of the entire war...Hastings combines a mastery of the military events with invariably sound judgment and a sharp eye for unusual telling detail....this is military history at its most gripping. Of all Max Hastings's valuable books, this is possibly his best - a veritable tour de force". Evening Standard

GOR003986929
All Hell Let Loose: The World at War 1939-1945 by Sir Max Hastings
Sir Max Hastings
Used - Very Good
Paperback
HarperCollins Publishers
2011-09-01
768
0007431201
9780007431205
N/A
Book picture is for illustrative purposes only, actual binding, cover or edition may vary.
This is a used book - there is no escaping the fact it has been read by someone else and it will show signs of wear and previous use. Overall we expect it to be in very good condition, but if you are not entirely satisfied please get in touch with us.