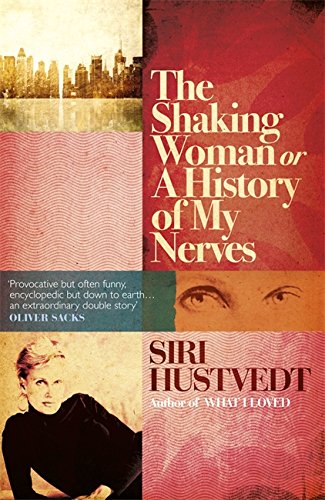 Used Price
$9.69
Free Shipping in the US
By the bestselling author of WHAT I LOVED, an intimate and enlightening account of her search for the key to her mysterious nervous disorder, which brilliantly illuminates the connection between mind and body.
Reviews:
Trustpilot
Like New Very Good Good

The Shaking Woman or A History of My Nerves Summary

While speaking at a memorial event for her father, the novelist Siri Hustvedt suffered a violent seizure from the neck down. Was it triggered by nerves, emotion - or something else entirely?
In this profoundly thought-provoking and revealing book, Hustvedt takes the reader on her journey through psychiatry, philosophy, neuroscience and medical history in search of a diagnosis. Conveying the often frightening mysteries of illness, she illuminates the perenially mysterious connection between mind and body and what we mean by 'I'.

Customer Reviews - The Shaking Woman or A History of My Nerves

The Shaking Woman or A History of My Nerves Reviews

Provocative but often funny, encyclopedic but down to earth...Hustvedt's erudite book deepens one's wonder about the relation of body and mind. * Oliver Sacks *
Readers of Oliver Sacks will rate this book highly; as with Sacks, scientific knowledge and a powerful capacity for empathy are closely linked...It is Hustvedt's gift to write with exemplary clarity of what is by necessity unclear. * Hilary Mantel, Guardian *
She thinks her way through complex subject matter with the effortless clarity of a poised and sceptical outsider...a short book with an encyclopaedic breadth * Lisa Appignanesi, Independent *
She has an enviable ability to digest and reframe her discoveries into clear, accessible prose * Melanie McGrath, Sunday Telegraph *
Fascinating...what gives the book its originality is that she wavers on the edge of the various disciplines, preferring her own imaginative, deeply personal reflections to the potential certainty that might be offered by doctors...Although a desire for clear-cut answers is understandable, Hustvedt suggests that this is often far from possible. And she leaves the reader thinking about his or her own bouts of illness in a thoroughly fresh way. * Lorna Bradbury, Daily Telegraph *

Siri Hustvedt's first novel, The Blindfold, was published by Sceptre in 1993. Since then she has published The Enchantment of Lily Dahl, What I Loved, The Sorrows of an American, The Summer Without Men and The Blazing World, which was longlisted for the Man Booker Prize in 2014 and won the Los Angeles Times Book Prize for Fiction. She is also the author of the poetry collection Reading To You, and four collections of essays -Yonder, Mysteries of the Rectangle: Essays on Painting, A Plea for Eros and Living, Thinking, Looking, as well as the memoir The Shaking Woman or A History of My Nerves. Born in Minnesota, Siri Hustvedt now lives in Brooklyn, New York. She has a PhD in English from Columbia University and in 2012 was awarded the International Gabarron Prize for Thought and Humanities. She delivered the Schelling Lecture in Aesthetics in Munich in 2010, the Freud Lecture in Vienna in 2011 and the opening keynote at the conference to mark Kierkegaard's 200th anniversary in Copenhagen in 2013, while her latest honorary doctorate is from the University of Gutenburg in Germany. She is also Lecturer in Psychiatry at Weill Cornell Medical College and has written on art for the New York Times, the Daily Telegraph and several exhibition catalogues.

GOR010715037
The Shaking Woman or A History of My Nerves by Siri Hustvedt
Siri Hustvedt
Used - Like New
Paperback
Hodder & Stoughton
2011-01-01
224
0340998776
9780340998779
N/A
Book picture is for illustrative purposes only, actual binding, cover or edition may vary.
The book has been read, but looks new. The book cover has no visible wear, and the dust jacket is included if applicable. No missing or damaged pages, no tears, possible very minimal creasing, no underlining or highlighting of text, and no writing in the margins.